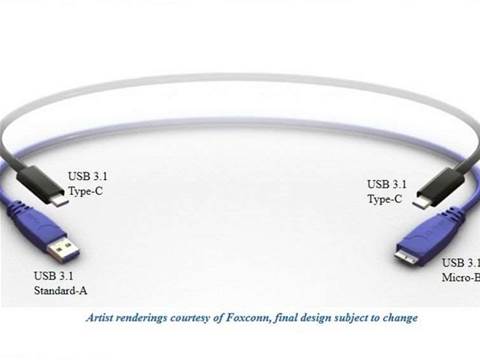 Electronics manufacturer Foxconn has put together an artist's impression of the USB cable that will finally end one of technology's biggest frustrations.

It's been a long-running joke that most people only manage to plug in a USB cable at the third attempt, having reversed its orientation twice, but the new Type-C variant will be reversible.

As the mock-up images from mass-market manufacturer Foxconn show, the connector is symmetrical so it won't matter which way up the connector is facing as you fumble with the cable with one hand while juggling a coffee in the other.

The connector will be similar in size to a Micro USB plug, allowing it to be used for smaller mobile devices, and has a roadmap to 10Gbits/sec transfer speeds and potentially fastest charging rates.

The connector, first previewed late last year, should see its specifications and design finalised by the USB Implementers Forum in July, but the images mocked up by Foxconn suggest manufacturers are already planning for an omnidirectional future.