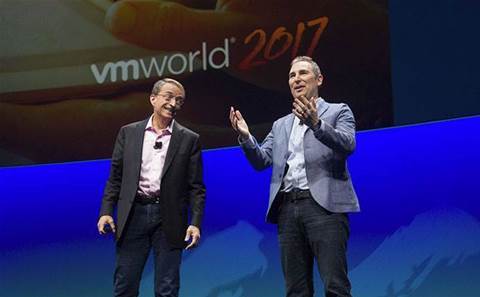 VMware has published pricing for its new service to run bundled software on the Amazon Web Services public cloud, which went live this week out of the first availability zone in the US.

Customers can expect to pay US$8.37 (A$10.56) per host per hour for the on-demand option, which is the only option until VMware launches one-year and three-year reserved instances in the future.

That's effectively US$6109 per month, according to VMware's price list.

It is unclear exactly what compute, memory and storage is provided as part of that bundled pricing. The service promises a single bill for software and hardware by combining VMware vSphere, vSAN and NSX delivered on AWS EC2 elastic, bare-metal infrastructure.

The service is delivered, operated and supported by VMware, including upgrades, patches and lifecycle management.

By VMware's own calculations, that works out to be 53-60 percent of the price of running VMware on-premises based on an estimated TCO per VM per hour over three years of 10c to 17c – though that depends on the consolidation ratio.

VMware is also releasing a loyalty program to provide savings of up to 25 percent on renewal by letting customers leverage on-premises product licences they own, which can continue to be used on-premises with no trade-in required.

The vendor also said VMware Cloud on AWS would be about the same price as a native cloud instance, depending on instance type and storage.

The cost comparison is based on one VM with two virtual CPUs, 8GB of RAM and 150GB of storage, and also takes into account on-premises equipment such as servers, storage, networking, power, cooling, and rack space.

Australian hosting for the AWS service is expected to arrive in 2018 following this week's launch of the first availability zone in AWS US West in Oregon.

The service was launched this week at VMworld in Las Vegas, with VMware managing director Pat Gelsinger joined on stage by AWS manging director Andy Jassy.

The journalist travelled to VMworld as a guest of VMware