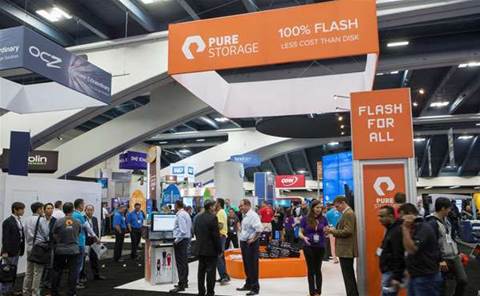 Value-added distributor Observatory Crest is offering resellers and its customers Proof of Concept (PoC) units of new all-flash storage arrays by Pure Storage, one of numerous all-flash start-ups to disrupt the Australian market.

The company has raised US$245 million in pre-IPO funding from investors that includes Samsung – the supplier of its SSDs.

Pure Storage and Observatory Crest are shipping PoC units to support channel partners in proving to new customers the new storage array is as fast, reliable and efficient as the vendor claims.

Pure Storage argues that by combining the use of consumer-grade SSDs from Samsung with some firmware enhancements, de-duplication and compression, the arrays can bring the cost per gigabyte in-line or even lower than the high-end 15k and 10k RPM disc.

"It pays for itself," said Observatory Crest managing director Martin Christmas. "Rack space is reduced, power consumption reduced and so is maintenance because it doesn't have any moving parts."

Christmas said the technology would appeal to service providers for a number of reasons.

"Because of the all-flash array, I can reduce the physical amount of disk space a customer has to consume. I can build a premium level of cloud service because it's faster and quicker."

The deal marks the first time Observatory Crest has distributed storage products. Its roster otherwise includes products from such vendors as F5 Networks, FireEye and MobileIron.

"Up until now we've been covering security, but recently we've been looking for a product to help us expand our portfolio," Christmas said. "We singled Pure out as a vendor because we realised how disruptive this technology is going to be."

Pure Storage sells on a 100 percent indirect model in Australia.

Michael Cornwall, VP for Pure Storage in the Asia Pacific region said he chose Observatory Crest as Pure Storage’s VAD after learning of the distributor’s success with F5 Networks.

“They have done a great job of growing with the F5 business here in Australia,” he said. “They have this different value-added model - they have sales people, marketing and support on the ground and can give introductions to the right channel partners. Resellers often sound great in meetings, but its about the action behind the scenes that you want to see - I’d say 60-70 percent of our signed channel partners came through their introductions.”

The first priority for the two organisations is a ‘steady flow’ of PoC equipment on-hand in Australia and New Zealand.

“We encourage customers to see it to believe it,” said David Hatfield, president of Pure Storage. “It’s such a strong value proposition, people tend not to believe it.”

Christmas said he has already signed 15 partners to resell the SSD storage arrays.

"A quarter of them are service providers and the others are more traditional resellers," Christmas told CRN.