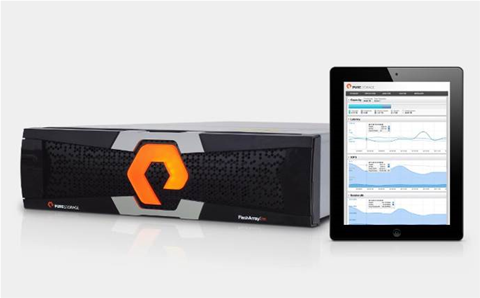 All-flash storage technology developer Pure Storage has signaled its intention to be a force in the multi-cloud data management business with the introduction of two initiatives to its high-performance storage capabilities natively to the cloud.

The company also introduced CloudSnap for AWS, a technology for natively sending data backups from its flagship FlashArray all-flash arrays to AWS for cloud-based data protection and recovery.

The result is a whole new way of thinking at Pure Storage, said Matt Kixmoeller, vice president of product and solutions marketing.

"In many ways, this is the start of a second chapter for Pure," Kixmoeller told CRN USA. "It's the first time we partnered with AWS on a set of cloud services."

Pure Storage believes in a data-centric architecture that offers high-performance shared storage, provides capacity delivered on demand, and enables a hybrid world where the data can sit on-premises and in the cloud, Kixmoeller said.

Pure Storage has been building its cloud capabilities for well over a year. The company last year at its Pure//Accelerate conference introduced a hybrid cloud solution for AWS, and is offering customers direct connections to the Microsoft Azure and Amazon Web Services clouds.

Starting now, and over the next few months, Pure Storage will be getting closer to AWS in a cloud-native fashion.

The company on Monday unveiled Cloud Block Store for AWS that allows the company's software to run natively on the AWS cloud and offer the full range of data services, Kixmoeller said.

"This is industrial-strength block storage," he said. "Often, block storage on the cloud doesn't have the needed services. But we're not just taking our on-premises software, putting it in a virtual machine, and running it in the cloud. We've optimised our software to run on the cloud. When the software runs on-prem, it talks to our hardware and NAND memory. When it's running on AWS, it talks to Amazon as the hardware platform."

Cloud Block Store for AWS, on the other hand, includes deduplication, compression, and thin provisioning, Kixmoeller said. Thin provisioning is the ability to provision additional capacity as needed and not have to do so in advance.

"Cloud applications are normally thick-provisioned, so you have to pay more for compute and capacity," he said. "We're more efficient."

Cloud Block Store for AWS also includes full data resiliency services, including active-active resiliency between multiple availability zones, along with a full suite of other data protection capabilities, he said.

The Pure1 storage operating system also extends across on-premises and cloud architectures, Kixmoeller said. "You can use VMware's vRealize on-premises to spin up Cloud Block Store on Amazon and replicate data to the cloud," he said. "You can spin up an instance in a half-hour, then turn it off, all automated via APIs."

The second major change at Pure Storage is a new modernization of data protection that takes advantage of on-premises flash-based storage for performance combined with the cloud for secondary storage or disaster recovery.

This is becoming a big issue for a lot of customers who are actually buying Pure Storage's high-performance FlashBlade arrays for data backups, Kixmoeller said.

"We were confused about this at first," he said. "But we saw people needed fast restores. Restore speeds has become a real pain."

First, the company introduced CloudSnap which takes snapshots of data on FlashArray arrays to move to another FlashArray or FlashBlade for fast access, and then to Amazon for long-term data protection, Kixmoeller said. "Clients can use the backup copy to recover data to a Cloud Block Store instance if needed," he said.

The second is taking advantage of Pure Storage's acquisition this Summer of StorReduce, a small developer of software for deduplicating, managing and migrating data.

Using the StorReduce technology, which provides the industry's first cloud-based deduplication engine, customers can back data from both Pure Storage and non-Pure Storage arrays to the cloud without modifying their existing backup software or data protection environment, Kixmoeller said.

"Just point your existing environment to StorReduce, and it takes advantage of both flash storage and the cloud," he said.