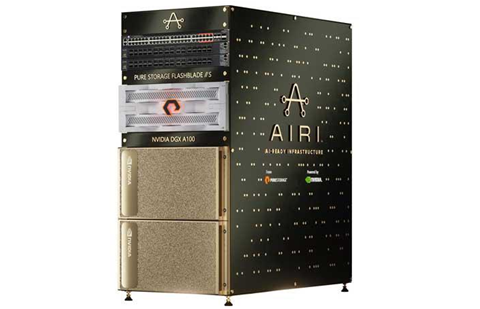 Flash storage developer Pure Storage together with technology partner Nvidia Wednesday unveiled the next generation of their AIRI AI-ready infrastructure that combines Pure Storage’s new FlashBlade//S: array with Nvidia’s DGX GPU and promised to update that infrastructure to more advanced Nvidia GPUs as they become available.

The new AI-ready architecture was introduced at the Pure//Accelerate Digital techfest22 conference being held this week in Los Angeles.

“And as Nvidia continues to introduce next generations of its DGX, we will continue to further develop the AIRI//S,” she said.

When it was first introduced, AIRI was the world’s first infrastructure for building AI-based infrastructures, reducing 50 full racks of equipment to 50 rack units of space, said Tony Paikeday, senior director of AI systems for Nvidia.

“Customers used to think AI was out of reach, but they don’t think that way now,” Paikeday told CRN.

AIRI is already in use with the world’s largest social media company’s recommendation system, as well as for language processing, pathology, radiology and autonomous driving systems, Paikeday said.

“These were all different,” he said. “Each is optimized to deliver one part. The DGX A100 can do all three within one system. Nvidia has shrunk the compute footprint just as Pure Storage has shrunk the storage side.”

The data requirements for those three capabilities can also be different, Fowler said.

“On the storage side, even if all the AI compute is consolidated on the DGX, you still need to be able to scale to handle not just the petabytes of data, but the hundreds of millions of transactions,” she said. “With our new FlashBlade//S:, we have doubled the density, performance and power efficiency of our storage. We’ve increased capacity to 2 petabytes but did not sacrifice the performance.”

“When we talk with customers and look at what they are trying to do with AI, many treat it as any other legacy workload,” he said. “But they often find very few of their models get deployed into production. A lot of the reason for that is the lack of infrastructure tools and applications. Customers tell Pure Storage and Nvidia they need both to develop AI. That is why they invest in AIRI.”

“We look forward to building growth with AIRI,” Fonke told CRN. “We haven’t sold a ton of AIRI yet. But we’re looking forward to the advancements in the FlashBlade//S: arrays and future versions of the DGX technology to ensure the alliance between Pure Storage and Nvidia will move forward.”

Customers in such areas as life sciences, genomics, manufacturing and pharmaceuticals are purchasing solutions from World Wide Technology, Fonke said.

“We’re looking at ways to bring in new capabilities for these customers who are investing heavily in analytics and AI,” he said.

“Customers are showing increased interest in solutions for the AI and machine learning space,” Field said. “And they want something that is easy to consume as a package with compute, storage and network like AIRI.”