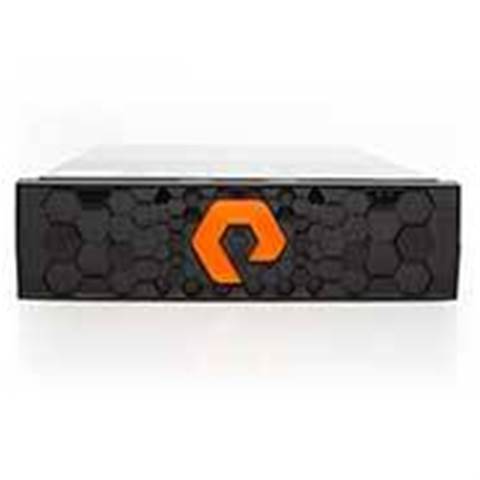 Pure Storage has unveiled the latest version of its FlashArray//X storage line, and said that its upcoming refresh of its Purity storage operating system will allow the FlashArray//X manage both block-based and file-based data.

The latest FlashArray//X line is now based on Intel's second generation Xeon Scalable processors, giving them an immediate boost of up to 25 percent in performance over the previous generation of FlashArray//X arrays, said Matt "Kix" Kixmoeller, vice president of strategy for the Mountain View, Calif.-based company.

The array line, which features the company's own self-designed NVMe-based DirectFlash Modules instead of industry-standard SSDs as a way to further boost performance, now also has access to 1-TB modules in addition to the 4.5-TB, 9-TB, and 18-TB modules previously offered.

"We source our own flash chips and our own controllers," he said. "We don't use standard SSDs. Before, we did this all at the high end, and now we're doing it with our X10 and X20 arrays. ... Our DirectFlash strategy has been really successful for Pure Storage."

"This is a straight upgrade for customers who invested in the product line," he said. "They will automatically receive a free upgrade under our Evergreen program. Most customers are subscribers. Every three years they get upgraded controllers. So customers who purchased FlashArray//X in 2016 or 2017, they'll get up to 50-percent upgrades in performance."

While he declined to get into details about the upcoming launch, he did share that the key change will be the addition of file-based storage capabilities.

The current version of Purity, which is at the center of the FlashArray//X line, is focused on block-based data, while the company's FlashBlade array line is targeted at file-based and object-based storage workloads.

Kixmoeller said the company will keep both lines after the release of Purity 6.

"FlashBlade is great for bid data and other high-performance file data needs," he said. "And FlashArray will be great for customers who need combined block and file capabilities. Both are very active products, and growing products."