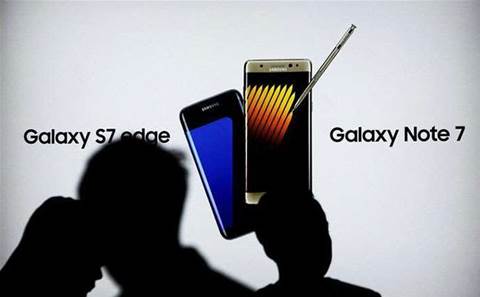 Australia's airlines have joined worldwide carriers in banning the Samsung Galaxy Note7 from being carried on flights.

In separate statements, Qantas, Virgin Australia and Tigerair all declared that, as of this weekend, carriage of the device on any of their flights was prohibited.

According to a statement from Qantas, the carrier along with its Jetstar brand both prohibited Note7 devices from being carried onboard from 12.01am Sunday 16 October 2016.

"This is due to concerns regarding potential fire risk from the device’s battery after a number of incidents worldwide and follows a ban put in place by regulators overseas. The ban applies to devices being carried onto the aircraft, in carry-on baggage as well as check-in luggage. Other Samsung devices are not affected."

Virgin also said that Samsung Galaxy Note 7 devices could no longer be carried on flights "due to safety concerns around the device and follows the implementation of a ban by the US Department of Transportation".

"Guests are strongly advised not to bring these devices to an airport when travelling."

The US Transportation Department banned the devices from aircraft in the United States, warning passengers who packed the devices in checked luggage raised the risk of "a catastrophic incident", according to Reuters.

Reuters reported that other airlines to have banned the troubled Samsung device include Singapore Airlines, Air Berlin and Lufthansa.

The Samsung Galaxy Note7 was first recalled in September, with more than 50,000 recalled across Australia due to a fire risk. The replacement phones arrived soon after, but then these were pulled after further spate of fires and the device has now been scrapped.