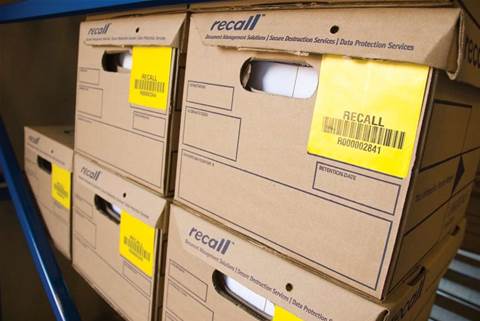 The system, which is being rolled out progressively globally, attaches a UHF RFID tag to the outside of the physical cartons that hold customers’ paper documents.

The cartons are typically stored three-deep in racks that can be between 10 and 26 metres high. This can pose issues in an audit situation – requiring the warehouse staff to physically pull out each box, scan the barcode and replace it again, according to Russell Skinner, global vice president, business integration at Recall.

“The nature of the industry means that you’re trying to maximise physical document storage density but at the same time be able to access the cartons and the information in them on a relatively easy basis.”

The firm’s local operation began trialling the RFID carton tracking system 12 months ago. It launched the system in Perth in August, and brought its East Coast operations online this month.

Customers purchase the RFID tags themselves and affix them to boxes before handing them off to Recall to store.

Existing cartons will not be retroactively fitted with RFID tags, according to Skinner.

“All new boxes effective 1st November or thereabouts will be tagged.”

He added: “The net effect of that is that over a four or five year timeframe it’s likely 30 percent plus of total customer holdings will be tagged.

“It’s those cartons that represent 80 percent or more of retrievals.”

Because it is a global project, the firm had to overcome some technical challenges in bringing it to Australia, including the difference in tag frequency ranges used locally and interference caused by the varying levels of steel content in rack shelves.

The system is also isolated from Recall’s core IT systems; information read from the tags feeds into a separate SQL database.

“In an ideal world we’d link it into our core systems with APIs, but the reality is this opens up some massive complications as well,” said Skinner.

He did, however, add that further ‘innovation’ on this architecture model was in the works.

Skinner claimed the system had achieved a 100 percent acceptance rate among its 19,000 level one customers in Australia.

“It’s been quite remarkable,” he said.

The firm will now look to take tracking down to the file level. Each carton typically contains between 10 and 100 cardboard files, which organise the individual documents.

“We’re not looking at [tagging at] the individual document level because the proximity of the tags to each other would mean problems reading them, and there’s also a tag cost issue,” added Skinner.

Recall is owned by Brambles, which also owns Chep, another pioneer user of RFID tracking technology.

Grabbing the hybrid cloud opportunity with Lenovo and Azure Services
By Ry Crozier
Nov 15 2008
8:22AM