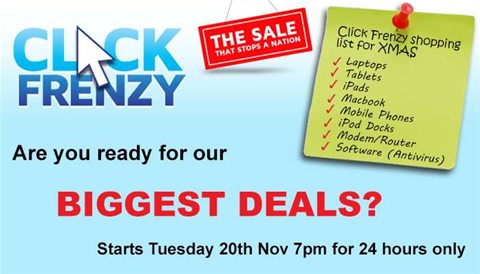 Retail partners of Click Frenzy, the highly-promoted ‘shopping event of the year', have slammed organisers for failing to implement adequate infrastructure before sales began last night.

The website bombed for the first five hours of the 24 hour event, inaccessible within minutes of the promotions going live.

The company simply tweeted that its systems were experiencing "huge volumes of traffic, as expected" and it was "prioritising users".

"We cracked 2 Gbps of non-image content which is quite significant," Ultra Serve representatives said.

Click Frenzy revealed little during the controversy, sporadically taking to social media to advertise the sales while making no reference to performance issues. When it finally did respond to a wave of criticism by irate consumers, organisers said they were "not embarrassed" by the level of traffic.

Retail partners were also kept in the dark.

One technology reseller, Nortec IT, forked out $5000 for a ‘premium’ spot on the Click Frenzy website and received zero traffic for the first five hours of the launch, without explanation from Click Frenzy.

CEO David Norris was forced to take to Facebook to request that a link to his website be placed alongside others Click Frenzy was marketing on its social media webpage.

Norris told CRN he expects a minimum of 10 percent compensation for his fee.

“I went to bed at 11pm and we had zero click throughs from their website at that stage,” he said. “We started to get a couple of clicks from their Facebook page around midnight. We received more [referrals] from other websites than we did from Click Frenzy.”

Norris said Click Frenzy had failed Computing 101 by not properly preparing for the influx of interested buyers.

“If they’d spoken to any decent technology business, we would have said [standard] hosting wasn’t going to work. Five hours is a long time to get something fixed. It should have been fixed in five minutes.”

Despite the difficulties last night, Nortec IT has been “flat out” attending to calls and inquiries since the site came back online this morning. The reseller’s strategy is to use low-end product bargains as a driver for awareness for its services business.

“If you asked me this morning when I woke up, I would have said it was a really bad experience and bad management style, but [sales] seem to have kicked in now,” Norris said. “It will raise brand awareness and hopefully will generate VoIP and services sales downstream.”

Nortec IT partnered with Acer for the sale, selling two models of laptop and a keyboard and mouse bundle. Norris said the company will have exhausted most of the stock by the end of the day.

Despite the negative publicity and technical issues, he said he would consider a similar initiative next year.

“If the amount of pings we’re getting now is any indication of what it’s going to be like in future years, I think we’ll get involved again,” he said. “We’ll have exhausted most of our Acer stock so Acer will be happy, and they got a bit of promotion on their branding. It was a great kick to our website, and we’ve generated sales on other products because of this.

“It’s cheaper than an advertising package to give us brand awareness.”

Technology reseller Mwave also jumped aboard the Click Frenzy bandwagon to offer a TV and hard disk drive at low prices. Managing director Victor Lee said he had expected the site would experience performance issues, and was only upset the operators failed to keep him in the loop.

He told CRN that Click Frenzy had sent out an email to retail partners prior to the sale, advising them to check their IT infrastructure was capable of supporting a wave of customers.

“I don’t know their back-end scenario, but if they are the gateway for this type of event they should be online at all times,” Lee said.

Mwave opted for a basic package, paying one fee for each of its two product placements. Lee said he didn’t expect compensation because resulting sales had exceeded his costs.

“Our sales are better than expected. While the website was down people still came to our website, and we’ve seen the result,” Lee said. “The result we are getting is well worth what we invested, even though it could have been more.

“We had a good outcome for the first five hours, but after midnight it was unbelievably good. Just this morning, we’ve matched a whole day’s sales. And interestingly, more than 100 SKUs moved from the website.”

Lee said he would also still consider getting involved next year.

“Next year they will be much more experienced and prepared.”

Grow your software revenue by selling these 5 affordable, essential tools for the modern workplace
By Allie Coyne
Nov 21 2012
10:44AM