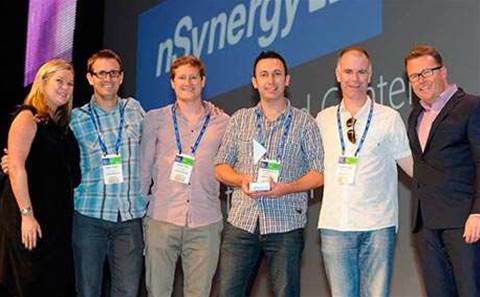 nSynergy collects an award at the 2013 awards

Born-in-the-cloud startups will rally beside massive resellers such as Data#3 and UXC in the hunt for awards at the upcoming Microsoft Australia Partner Conference (APC).

The vendor has released its list of finalists for the Microsoft Australia Partner Awards, which will be revealed at APC in September.

[Check out the photos from last year's APC]

Sydney-based applications house Breeze has the most nominations of any company, with four. The company has been on a winning streak of late, picking up an international Microsoft award at the recent World Partner Conference, as well as a NSW iAward.

Other companies with multiple nods include UXC – which has received one nomination each for its Oracle house, Red Rock Consulting and its Microsoft Dynamics unit, Eclipse – along with Melbourne-based Bizdata, Adelaide-based OST and Sydney-based Nexon, which all have two each.

Phil Goldie, Microsoft Australia director of partner business & development, said: "Every year one of the highlights of APC is celebrating our Microsoft Australia Partner Award winners - the best of the best and the Microsoft partners who are delivering amazing innovation and solutions to customers across the country.

"Today I'm pleased to announce the finalists in each of the categories. The standard of entries this years was incredible and I'd like to thank every partner who submitted a nomination."