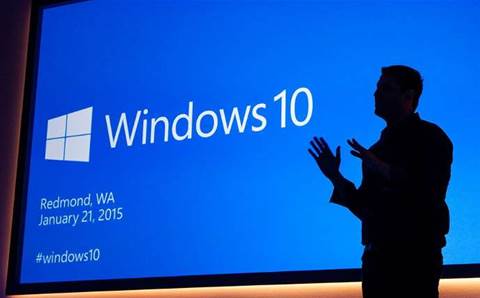 The news broke last week that Microsoft is downloading Windows 10 files to PCs running Windows 7, 8 and 8.1, even if customers haven’t consented to the free update.

The installation files, which were included in a recent Microsoft update, are between 3.5 GB and 6 GB in size and located in a hidden folder called $Windows.~BT, according to the story first broken by The Inquirer.

Some Australian resellers have been receiving customer complaints about the large, unsolicited file downloads.

“I think the way they [Microsoft] have gone about it is blatantly wrong,” said Grieve. “It’s got to be one of the silliest moves in the industry. [Microsoft] has no idea what conditions the machines are in that they’re leaving [Windows 10] on.

“I haven’t heard a single person say anything good," he added.

Grieve said Windows 10 had also been failing to install correctly, even on customers with newer, larger systems. He acknowledged that some of the problems were with customers using thin clients.

“Whenever customers have downloaded it, their machines are failing. They’ve got what seems to be a Windows 10-looking screen but they can’t access any of their files or emails and they have no choice but to kill off the machine.

“There might be some use for it once all the features actually come out for Australia, but they really jumped the gun. There’s absolutely nothing in there for us at the moment. We’ve been advising customers not to update but Microsoft is going ahead with it anyway and we don’t have a choice.”

Nick Gooding, director of Kalgoorlie PC Doctor in regional Western Australia, has seen the problem. “We had a lady, who is 80 years old, on a 4GB Telstra plan who went over her limit because the Windows 10 upgrade is at least 5GB,” said Gooding.

“She only goes online for Skyping and sending a few emails, so 4GB is enough. Instead, her internet has been shaped down to dial up. The problem comes from the way updates work now, it starts peer-to-peer sharing so it goes through their download and upload as well.

“The concern is that it’s sharing it and hiding it away even if you want to disable it. The lack of transparency is a bit underhanded. They haven’t taken into account people on limited packages. [Microsoft] should have just been more open instead of only promoting that it’s free," said Gooding.

South Australian Lincoln Computer Centre is another reseller advising its customers not to upgrade. Owner Greg Williams sent his customers an email urging them not to upgrade to Windows 10 if they were already running Windows 7 or 8.

“We’ve enjoyed Windows 10 making a mess of the market as it’s great for business,” said Williams. “But there’s a whole bunch of customers who are in trouble. We’re telling people that Windows 10 is OK for a new system but if Windows 7 or 8 isn’t broke, don’t fix it. If you have an existing machine, than you’d be crazy to upgrade.

“Microsoft is doing as bad a job as they did with Windows 8. It’s a perfectly good OS with a clumsy introduction and they’re letting the market think it’s bad. I don’t know when they’ll stop selling Windows 7," said Williams.

“The privacy settings are just a disgrace; it’s just a means to an end for Microsoft. They’re even worse than Facebook in privacy issues and Windows 10 asks you to give up more details.”

Melbourne Information Solutions’ director, Olaf Bulenda, said Microsoft is breaching its own safety policies with the rollout. “It even goes against Microsoft’s own policy for malware with Microsoft icons all over the system.

“It’s not that I don’t like Windows 10, we’ve been in the Insider program for months. We just need a choice in the matter. We don’t want to be forced into something we have no say in. Their customers think it’s just a bit of an impost.

“Microsoft doesn’t even give any choice in the matter; they’re forced to download 6GB of updates that might not even be used," said Bulenda.

Not every reseller was critical. HubOne chief executive Nick Beaugeard said he hasn’t had a single customer issue with Windows 10.

“We’ve had no comments from customers at all about any problems,” said Beaugeard.

“We have had a lot of excitement, primarily because Windows 10 works better in the cloud. Most of them are SMBs with limited internet downloads and nobody has mentioned a thing except for asking when they can get it," he said.

“We’re in the middle of a rollout for Australia’s largest mortgage broker, and probably 10 percent of our customers have already moved to [Windows 10]."

A Microsoft spokesperson told CRN the updates were to “help customers prepare their devices for Windows 10 by downloading the files necessary for future installation. This results in a smoother upgrade experience and ensures the customer’s device has the latest software”.