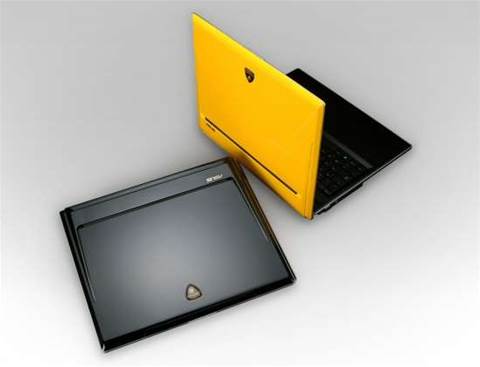 Asustek claims to have sold 435 units of its premium Lamborghini VX1 range of laptop computers through retail channels since they became available in August.

There were 585 models out of 5000 worldwide allocated to the Australian market. The notebook retails for about $4000.

It is expected that a new model, the VX2, will become available in the near future.

A relatively new entrant to the mass market retail scene, Asus secured a 4 percent share of laptop sales (by units) through retail across Australia in Q3, 2006, up from 3 percent in Q2, according to GfK data.

It has struck agreements with the likes of the Good Guys, Clive Anthonys and Radio Rentals.

An agreement with JB HiFi signed about three months ago has seen the retailer selling between 200 and 300 ASUS notebooks (priced between $1699 and $1999) per month, according to Emmanuele Silanesu, product manager at Asus.

Asus is placed at number six on the Australian notebook rankings, behind HP/Compaq at number one, Toshiba at number two, Acer at three, Sony at four and LG at number five. These rankings exclude Dell.

“I think they’ve done really well seeing as they’re not in Harvey [Norman] at the moment, said Neville Ray, an analyst at GfK.

“If [Asus’ share] has got to grow to about five [percent] they’ll have to look to maximise distribution as much as possible.

“They’re in more retailers than ever before. They’re definitely growing and doing quite well in that space.”

Meanwhile, the company is set to release a pink leather-covered 11-inch notebook in an obvious attempt to attract female buyers.

The release follows on from the launch of two brown leather notebooks in September. So far, around 360 of these leather-bound models had been sold in Australia.

Silanesu said Asus had no intention of being a “price leader" in the notebook market and would not play in the $1000 and below price bracket.

Asus is also looking to build its government and corporate business in Australia and is on the cusp of signing an agreement with an agency in Queensland. “We’re working with end-users to make them aware that Asus has a viable product that is trustworthy to their business," Silanensu said.