The 1U rack server is a perfect choice for rack dense computing and they don't come much more qualified than HPE's ProLiant DL360 Gen9. It offers impressive amounts of power and flexibility in a slim-line chassis and delivers it all at a very affordable price.

Perhaps more impressive is the fact that all the Base models come SAS3 ready as the price includes HPE's Smart Array P440ar 12Gbps SAS3 RAID controller with 2GB of FBWC cache and battery backup. Our Base system doesn't include any drives in the price but it does have eight free hot-swap SFF drives bays at the front ready for action. 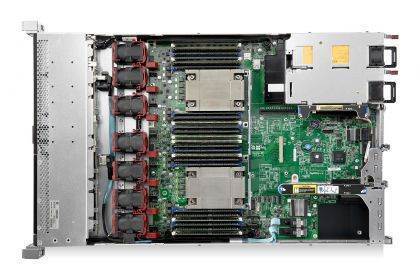 Room for more inside

The RAID card fits neatly into a dedicated slot behind the CPUs leaving the three PCI-Express slots free for further expansion. Network options are impressive as the server comes as standard with quad embedded Gigabit ports plus a dedicated FlexibleLOM slot which accepts HPE's dual and quad-port fibre and copper 10GbE, a choice selection of Infiniband or dual-port 10/25GbE modules.

Graphics accelerators are on the cards too, as HPE's optional enablement kits allow the server to support up to two Nvidia Tesla or Quadro GPGPUs. Naturally, you'll need to beef up the standard 500W PSU supplied with the Base system and HPE provides a handy Simplified Configuration web service to help you make the right choices. 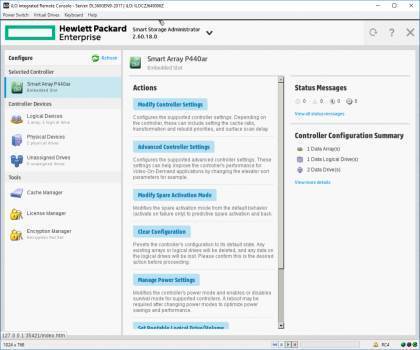 The DL360 Gen9 supports higher power 800W and 1400W PSUs or you can add some extra protection with HPE's nifty new Micro UPS module. Providing internal battery backup, this 750W unit fits in a standard PSU slot and in the event of a blackout, will keep the server up for an extra minute so you can safely shut it down.

Business running high-workload apps such as databases and analytics should check out HPE's new Persistent Memory NVDIMMs. These provide 8GB of DRAM that runs at the same speed at DDR4 memory and is backed up by 8GB of on-board flash memory. 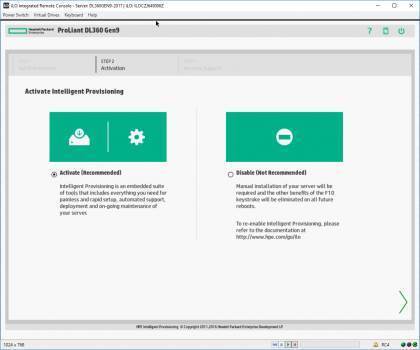 HPE offers a multitude of server management tools with the server's standard setting embedded iLO4 controller delivering a slick web interface with plenty of operational information and direct links to HPE support. We used it to view installed hardware, keep a close eye on power usage plus temperatures and, with an Advanced upgrade key applied, fire up remote control sessions.

We used HPE's iLO4 and Support iOS apps on our iPad to keep an eye on the server and check our support contracts. HPE's OneView is also loaded on the lab's Hyper-V host and this provided us with a centralised view of all our ProLiant servers along with options to manage and configure them.

OneView comes with a free Standard license which allowed us to monitor ProLiant servers, keep an eye on their vitals and receive alerts. For full infrastructure management and automated configuration of servers, blades, SANs and more you'll need to purchase an Advanced license. 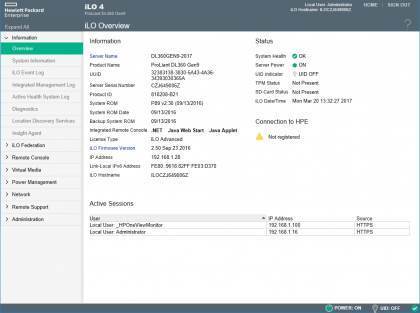 Our system came with 8 hot-swap SFF drive bays cabled directly to the P440ar RAID card leaving room to fit an optional universal media bay which provides VGA and USB ports plus an optical drive. Alternatively, you can dispense with this and fill the front panel with 10 SFF drive bays but be careful as HPE provides different enablement kits for SATA and SAS support.

Entry-level models use the embedded B140i SATA RAID controller or come with an H240ar RAID card. The latter is a cheaper option to the P440ar and has 12Gbps SAS3 support minus RAID6 and 60 plus HPE's SmartCache module.

High-performance storage is a possibility as the server can be configured with 4 standard SFF drive bays and 6 NVMe SSD bays. This requires a special enablement kit which includes an Express bay bridge card that must be fitted in the primary PCI-Express riser. 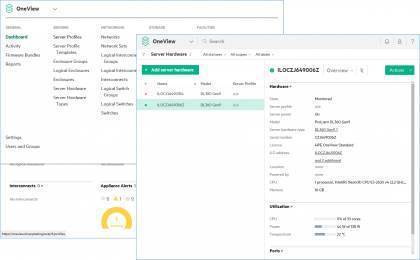 HPE's OneView app can manage all your servers, storage arrays, virtualisation hosts and much more

The ProLiant DL360 Gen9 is ideal for space constrained data centres as it delivers a powerful, high-density rack package with excellent expansion potential. The Base model on review is particularly good value and offers plenty of storage permutations while HPE's remote management capabilities are beyond reproach.

Eliminating departmental friction within MSPs
By Dave Mitchell
Jun 26 2017
11:19AM