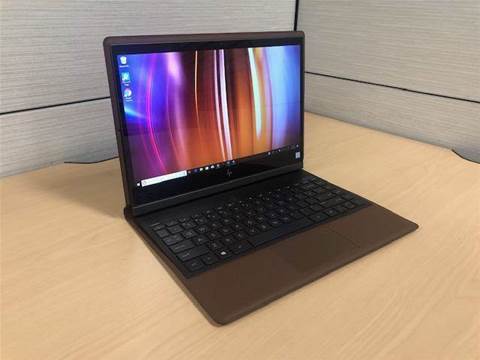 We've found a lot to like with the HP Spectre Folio, a convertible notebook that’s distinguished by having a 100 percent genuine leather covering around its exterior and keyboard.

We think HP largely succeeds in its goal of merging vintage aesthetics with some of the latest advances in mobility and personal computing. The 13.3-inch notebook—which HP has called the world's first "leather convertible PC"—is definitely about more than just leather. Its flexibility, battery life and LTE connectivity stand out as other strong suits.

What follows are our five favorite features on the HP Spectre Folio.

There's no question the Spectre Folio has a distinctive, fashionable look and feel. It’s just nicer to carry around than most other laptops—it doesn't really feel like you're toting a computer. The Spectre Folio is less industrial and a bit more natural and comfortable.

Ultimately, we also like the idea of premium laptop options being between more than just aluminum and carbon fiber.

While it's touted as a consumer laptop, there's good reason to think the Spectre Folio might make sense as a laptop for professionals given its design. The leather folio aesthetic really is more in the professional rather than consumer sphere. And the Spectre Folio really does look more like a leather notebook than a PC when it's closed (apart from the HP logo).

Even though we don't think the look of the Spectre Folio is for everyone, we applaud HP for trying something different at a time when there's a lot of the same circulating out there in laptop design.

The Spectre Folio is fairly portable, although far from the lightest or thinnest laptop right now at 1.47 kg and 1.5 cm thick—so there may be room for improvement in that regard.

Slimming down the bezels around the display could also reduce the overall size of the laptop, which is a good deal larger in overall size than the Dell XPS 13 and even a bit bigger overall than Lenovo's Yoga C930, even though the C930 has a larger display at 14 inches.

A key difference between the HP Spectre Folio and other convertible notebooks is that it replaces the typical "stand mode"—i.e., when you flip the display back and use the bottom of the keyboard as a stand to bring the display a bit closer to you. Instead of "stand mode," the Spectre Folio features "forward mode," where the screen comes forward and magnetically locks into position closer to your viewing.

The advantage with "forward mode" is that you can still use the touchpad, which reduces the need to extend your arm fully for navigating on the touch screen.

We found "forward mode" to be a compelling option in our tryout. Even though using a touch screen is nice some of the time, few people want to spend all of their time with their arm outstretched to navigate around on their computer. It's just tiring.

Instead, if you're just reading web pages or PDFs, or flipping through a PowerPoint, you can navigate using the excellent trackpad while also having the screen a bit closer to your eyesight. There are definitely times when you don't need the keyboard, but when having a trackpad would be ideal. And as of right now, the Spectre Folio is the only laptop we've tried that is specially set up for this scenario.

In addition, the Spectre Folio has a tablet mode, although the screen doesn't flip all the way around to the back as on other convertible notebooks; instead, the display just pulls further forward from its "forward mode" position to lay down flat.

The Spectre Folio offers a 13.3-inch touch-screen display—which looked terrific in our tryout, even if it's not one of the highest-res displays you can get right now.

Our tryout model featured 300 nits of brightness, which is bright enough for most purposes—although for regular outdoor use you might want to spring for a configuration with 400 nits.

We try to test out battery life in something approximating real-world scenarios, with heavy usage and multiple applications and browser tabs open at a time. That means we generally don't come anywhere near the generous battery life estimates provided by manufacturers. Thus, our result of eight hours of battery life for the Spectre Folio is still a strong result in our view, even though it falls far short of HP's promise of up to 18 hours for the notebook.

The Spectre Folio is available with 4G LTE connectivity so that the notebook can serve as an "always connected" device for users. Along with rarely having to lose web connectivity, LTE brings security advantages by not having to connect to potentially untrustworthy wi-fi hot spots.

Getting LTE capabilities requires buying a pricier SKU for the Spectre Folio, and also requires a data plan. However, as we've said before, we think LTE is a game-changer for business PC users thanks to the increased security and connectivity.

On overall performance, the Spectre Folio does not have the horsepower of many premium laptops hitting the market right now, due to the use of the low-power Y series chips from Intel. Applications and web pages don't load at lightspeed like on some other new notebooks, but the notebook would still rate as speedy by many users' standards. We don't see it as a major inconvenience, or a deal-breaker for anyone that is seriously interested in a notebook that rates so highly on design, battery life and flexibility.

The HP Spectre Folio is available for a starting price of $2999.