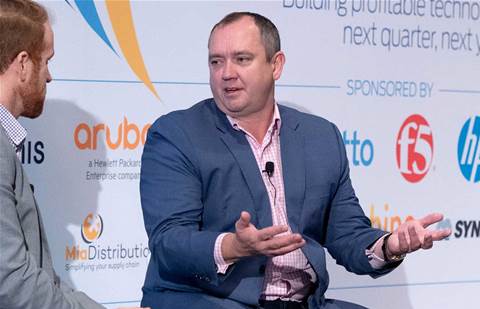 Plenty of channel players dream of building up a company and selling it, hopefully for enough dough to either fund their next venture, or to buy a yacht and disappear. Or sometimes for both reasons!

All of which is easier said than done.

But not for Dominic O’Hanlon. He’s sold FIVE tech companies. And led others: he’s now CEO of rhipe and has served in senior roles at Oracle, MYOB and more.

So how does he go about it?

“In any business that I go into I plan to make some pretty considerable change,” O’Hanlon said at rhipe’s recent Cloud Hour event in Sydney.

“The change must focus on significant growth. I'm not happy going into business and growing at 10 percent per annum.”

“The first area I tend to focus on is strategy, which is a very misunderstood word. People think strategy is what we're going to do. Instead, I tend to think strategy is about which opportunities we will walk away from. If you can define those, then you'll be in a much better position to focus and do well.”

“After strategy, I tend to look at organisational structure. I then look at processes and then, very importantly, culture. Getting these things right can make a company an attractive acquisition target”

“It’s important that a company has a unique value proposition. Something that makes it different to everyone else. If you can build that, you are onto something that can grow faster and more sustainably than your traditional competitors”.

O’Hanlon went on to explain his efforts at a company he took over and turned around from near bankruptcy.

“It was actually listed on the stock exchange but was de-listed due to liquidity concerns,” O’Hanlon said. “They asked me to come and join the Board.”

“When I had a look at the technology, I realised it was very special. But, key people spent all their time talking about their product. Why it is better than everyone else’s. Instead, the key was to focus on the marketing message and who will buy into your unique capabilities and vision”.

O’Hanlon suggested analysing which deals the company won, which deals they lost, and why. Then, using this information to describe the company’s differentiated value proposition. Once this was done, the company could engage in a compelling discussion with analyst firms such as Gartner and Forester.

Next came a new customer acquisition push, most of it export-focused. The company had a partnership with SAP but O’Hanlon had his eyes on Oracle. However, Larry Ellison’s company already had a similar partner based out of Pittsburgh in the U.S.A. O’Hanlon flew to Pittsburgh, bought the company, and then announced that he was going to retire their product. This changed the whole value conversation with Oracle. They ended up buying O’Hanlon’s company for a very significant sum.

Know what you DON'T DO

“When we sold that business, the technology had not really changed much. However, the company’s value perception was completely different.”

O’Hanlon’s lesson from this transaction? “Anyone that's trying to start a company or grow a company must be able to tell a unique and compelling story. Don’t chase every deal or every opportunity. Know what you are not going to do, what are you going to walk away from. With that, you start to focus on what it is that going to make you truly special”.

O’Hanlon also offered some opinions on the best way to fund a growth business.

“It is a case of horses for courses,” he said. “But I guess I can start to answer the question by asking what are the strengths and weaknesses of capital management in your business.”

“My first start-up was launched in an old fish and chip shop on Copacabana beach on the central coast of NSW. My partners and I used our credit cards to fund it and we took next to no wages.”

“Since then I have learned a few things about capital management. The first one is, if you're relying on your own cash flow, you can only get so far. Almost every major success story involves raising capital in one form or another. Whether it’s from family and friends, or from venture capitalists (VC). You need money to make money.”

“Venture capital has changed significantly over the past 20 years. Venture capitalists used to have a reputation of giving money on onerous terms and then working to take the company off the owners. “That perception has now gone away,” he said. Venture Capitalists are now known as savvy investors who will work with founders to build businesses towards agreed exit plans”.

“Private equity (PE) tends to be focused on larger deals and larger companies that with Venture Capital. PE is often more about a turnaround situation, picking the types of costs to be removed and investing in other areas that will lead to growth in revenue and profit.”

Unlike an injection of VC or PE money, O’Hanlon said a trade sale is the most common outcome for channel companies. A trade sale allows a company to become part of something bigger. A smaller piece of a bigger pie that leads to greater benefits for all.

He cited rhipe’s January 2019 acquisition of Dynamics partner Dynamics Business IT Solutions as an example of such an outcome. He added that the acquisition is the kind of thing rhipe is looking for at the moment.

“Our Vision as a company is ‘a world without shelfware’. When we look for companies to acquire, they are companies that can help us to fulfil this vision. Whether it is helping with cloud program success, value added services for our channel partners, or I.P. that helps us to deliver more value. The key is to find businesses that believe in enabling and driving consumption of subscriptions rather than doing large lumpy deals that may, or may not, deliver end user value ” Example targets include companies which could bring more channel-facing Azure or Dynamics skills to rhipe, or companies to help rhipe in its fast growing business in Asia.

“We're not really interested in buying companies that sell hardware from a warehouse or do large one-off enterprise consulting engagements that compete with our channel. The business must be able to fit with our cloud-first, channel-first strategy”.