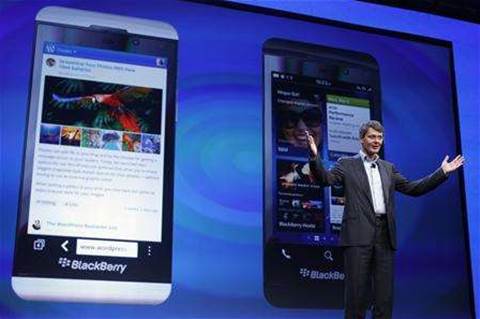 BlackBerry President and CEO Thorsten Heins raises his arms during the launch of the Blackberry 10 devices in New York January 30, 2013. Credit: REUTERS/Shannon Stapleton

Research In Motion is changing its name to BlackBerry in move to refresh its tarnished image as it begins marketing a reengineered line of BlackBerry 10 smartphones.

The announcement, made by chief executive Thorsten Heins as the company formally launched BlackBerry 10, signals the company's hopes for a streamlined identity as it embarks on a make-or-break drive to regain lost ground in the smartphone market it once dominated.

"BlackBerry is how we're known pretty much everywhere across the world other than North America, so we have an iconic global brand and when you have such a powerful brand, you want to make it central," said Frank Boulben, BlackBerry's chief marketing officer.

The switch underscores the close attention the company is paying to marketing as it launches a product considered crucial to its survival. In the past, it was roundly criticised for botching the launch of the PlayBook tablet and other devices.

RIM's aging line-up of devices has competed poorly in recent years against the likes of Apple's iPhone and Samsung's wide array of Galaxy devices.

As the company counters with its new line, the name change will allow it to leverage the value of the BlackBerry brand - still a powerful asset in spite of RIM's fall from grace.

"Previously we had Research In Motion, BlackBerry, Bold, Curve, Torch, PlayBook — and that dilutes the BlackBerry brand, which is a fantastic asset," Boulben said. "Moving to a branded house model allows us to focus our marketing on one name only."

"We thought now was the perfect time to accompany that real change with symbolic change," said Boulben, adding that RIM will change its Nasdaq ticker to "BBRY" and its Toronto Stock Exchange ticker symbol to "BB" in a matter of days.

The company will undergo a legal name change after its shareholders pass a resolution to that effect later this year, said a spokeswoman. Until then the company will do business as BlackBerry.

In keeping with its branding strategy, the new devices will also follow a simple naming structure, said Boulben.

RIM, which is already starting to call itself BlackBerry, had initially planned to launch the new BlackBerry 10 smartphones in 2011. But it pushed the date back twice as it struggled to work with a new operating system.

Ahead of today's announcements, analysts had said that any launch after February would be a black mark for the Canadian company.

"The biggest disappointment was the delay in the US, that it will take so long before the devices get going there," said Eric Jackson, founder and managing Partner at Ironfire Capital in New York.

Heins said the delays reflected the need for US carrier testing, although carrier AT&T offered few clues on what that meant.

"We are very enthusiastic about the devices. We will announce pricing, availability, and other information at a later date. Beyond that, nothing to add," said spokesman Mark Siegel.

RIM launched its first BlackBerry back in 1999 as a way for busy executives to stay in touch with their clients and their offices, and the Canadian company quickly cornered the market for secure corporate and government email.

RIM shares tumbled along with the company's market share, and the stock is down 90 percent from its 2008 peak.

The shares fell as much as 8 percent today, although they are still more than twice the level of their September 2012 low, reflecting ever-louder buzz about the new devices.

The new BlackBerry 10 phones will compete with Apple's iPhone and devices using Google's Android technology, both of which have soared above the BlackBerry in a competitive market.

The BlackBerry 10 devices boast fast browsers, new features, smart cameras and, unlike previous BlackBerry models, enter the market primed with a large application library, including services such as Skype and the popular game Angry Birds.

The BlackBerry Z10 touchscreen device, in black or white, will be the first to hit the market, with a country-by-country roll-out that starts in Britain on Thursday.

A Q10 model, equipped with small "qwerty" keyboard that RIM made into its trademark, will launch globally in April.

The Z10 device won a lukewarm review from Wall Street Journal tech blogger Walt Mossberg, who complained of missing or lagging features and a shortage of apps.

But David Pogue, who writes for The New York Times, apologised for describing BlackBerry as doomed in the past. The Z10 touchscreen device was "lovely, fast and efficient, bristling with fresh, useful ideas," he said.

Grow your software revenue by selling these 5 affordable, essential tools for the modern workplace
By Euan Rocha
Sinead Carew
Jan 31 2013
7:50AM