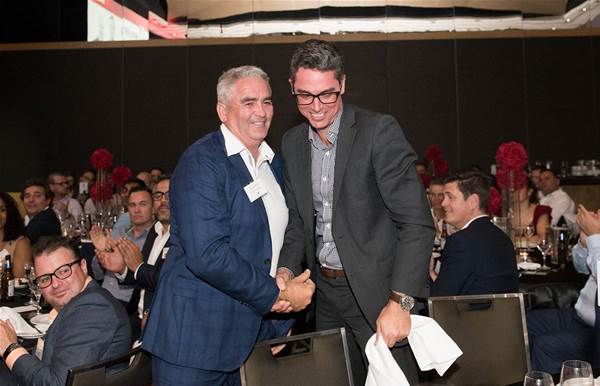 CRN is thrilled to announce its ninth CRN Fast50, comprising the fastest-growing IT solution providers in the Australian IT industry.

Technology companies from around the country flew into town for a lively awards ceremony at the Westin Sydney, where RIoT Solutions was revealed as No.1 on the list.

The Brisbane startup, the first Queensland company to win the top prize, invested in IoT after founder Rob Merkwitza realised how big the opportunity could be during Cisco Partner Summit 2015.

The timing could not have been better: the company saw a surge in business and achieved 343 percent growth in the 2016-17 financial year.

Second place went to Cevo, another 2015 startup, this one bearing some major cloud cred. The company's directors include Jamie Potter and Geoff Rohrsheim, who also founded major Microsoft partner Kloud, which Telstra acquired in 2016.

An AWS partner, Cevo has gotten on with the job quickly, attracting enterprise clients and growing 248.82 percent in FY2017.

Third place was snapped up by Perth’s Cirrus Networks, which returns to the CRN Fast50 podium just two years after placing No.3 in 2015. Cirrus is back and bigger than before, having acquired Melbourne’s NGage Technology Group (a former CRN Fast50 No.1) early in the year, before backing that up with the acquisition of another CRN Fast50 high achiever in Canberra’s Correct Communications.

Details on the other 47 winners, including the entire list, a full breakdown of their stats and analysis of the numbers, have been published in the December issue of CRN magazine.

For a slideshow of the full list of winners, check out our 2017 CRN Fast50 gallery, or register for our CRN Channelwire email newsletter, which will give you access to a summarised 2017 CRN Fast50 ladder.

"Every year the CRN Fast50 gets more competitive. This is the ninth year of the awards since we launched the program back in 2009, and it was the fastest year yet. The average growth rate was 85.9 percent! It was an incredible achievement by all of the companies that secured a place in the 2017 CRN Fast50,” he said.

"This year included a diverse mix of technology companies of all shapes and sizes, from all corners of Australia. We had IT providers specialising in networking, in security, in public cloud. We celebrating tech firms that have developed their own intellectual property and those that have partnered with new and interesting vendors. Services continue to be a central focus, both professional services and managed services.

"I was extremely impressed by the focus on culture. In a sector where the battle for talent is ever-present, the CRN Fast50 have proved they can attract the best people to their teams to deliver outstanding results for customers."

The 2017 CRN Fast50 Icon Award, as voted by the CRN Fast50 companies themselves, went to Thomas Duryea Logicalis. The CRN Fast50 Editor’s Award was given to Tquila ANZ. CRN’s Fast50 Leader award recognises the biggest company on the list, and this year it was Cirrus Networks’ mix of speed and scale that earned it the gong.

Joining the CRN Fast50 All Stars club, an exclusive group of IT providers that have appeared in the awards at least five times, was Queensland Computers, Outware Mobile and Reseau. Special mention also goes to Comcentre, which made its sixth CRN Fast50 appearance this year.