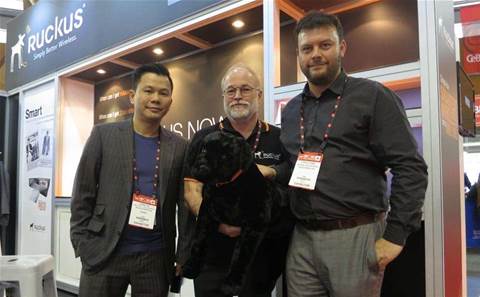 Ruckus Wireless is plotting an aggressive move down market into the SMB and SOHO segments with Xclaim, a new sister brand and set of products designed specifically for smaller organizations.

The Californian wireless vendor also said it's looking to recruit a new set of small-business-focused partners to help fuel this SMB attack.

Unveiled Wednesday US time, Ruckus' new Xclaim product line includes four controller-free wireless access points (APs) that it said delivers the same enterprise-grade capabilities of its legacy ZoneFlex line of APs, but at a price point that makes them more accessible to organisations with 100 or fewer people.

"I call it the 'Goldilocks solution,'" said Rob Mustarde, vice president of corporate development at Ruckus, of the new Xclaim line. "It's not too complicated, but it's not so simple that it doesn't solve the most basic needs of a small business."

None of the four APs require a controller but can be configured and managed instead by Harmony, a free iOS and Android mobile app created by Ruckus. Harmony also provides users with realtime status updates on the performance of their Xclaim APs.

According to Mustarde, the Xclaim APs also have all the trappings of an enterprise-class AP, such as dynamic channel selection, band steering, client isolation and airtime fairness. They aren't, however, designed to support more than 100 devices like the Ruckus ZoneFlex line can.

The Xclaim APs are being backed by a dedicated business unit within Ruckus and will be sold through different channels than the legacy Ruckus products. Mustarde said Ruckus is looking to recruit a new group of partners who are exclusively focused on the small-business space to resell the Xclaim line.

In addition, Xclaim also will be sold directly though a new, dedicated website – www.xclaimwireless.com -- and through e-commerce sites like Amazon, eBay and NewEgg.

"If [small businesses] do buy from a VAR, in many instances it won't necessarily be the same sort of VAR that Ruckus currently deals with because, again, it’s the low end of the market and our partners are typically selling into the midmarket, which is the sweet spot for them," Mustarde said. "So we are looking to expand our channel from an e-commerce standpoint and from a VAR standpoint, but with different kinds of VARs."

While there is not yet a formal partner program for the Xclaim line, partners will be held to a separate set of terms and conditions, along with a separate set of financial discounts and incentives, than they are when selling legacy Ruckus products.

To that end, existing Ruckus partners will not automatically become Xclaim partners, Mustarde said. They will have to apply and accept these new conditions in order to sell Xclaim.

Likewise, Xclaim partners will not automatically have the green light to start selling products under the Ruckus brand.

In general, Mustarde said he sees a significant opportunity for Ruckus and its partners in the small-business market moving forward. He cited research from industry analyst Dell'Oro group that predicts the wireless market specific to small-and-midsize business to reach US$1.4 billion by 2018, up from US$700 million last year.