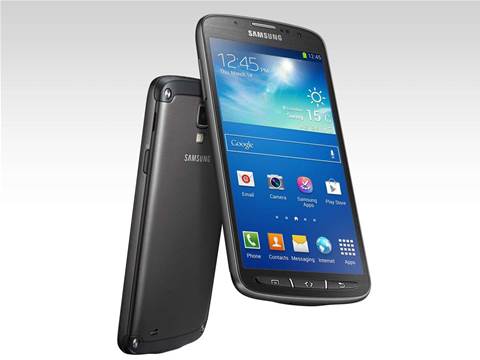 Samsung has officially unveiled its ruggedised version of the Galaxy S4, the Samsung Galaxy S4 Active.

The toughened-up version of the Samsung Galaxy S4 adds IP67 level water and dust proofing – meaning it can sit at the bottom of your bath for 30 minutes before it needs to come up for air. It also features physical Home, Back and Menu buttons instead of the S4's capacitive buttons – handy for those outdoorsy types who are likely to be wearing gloves while using it.

The Galaxy S4 Active only features an 8MP main camera instead of the standard Galaxy S4's 13MP snapper – but it does come with a new Aqua Mode made for shooting underwater pictures and videos. This camera app can be opened quickly and activated using the volume buttons – which can also turn on the LED as a backlight for low-light recording. Round the front there's a 2MP camera for video calls.

The Samsung Galaxy S4 Active will come in Urban Grey, Dive Blue and Orange Flare later this summer. Expect a firm release date and price to be announced at the official event on June 20th.

Grow your software revenue by selling these 5 affordable, essential tools for the modern workplace
By Luke Edwards
Jun 7 2013
8:04AM