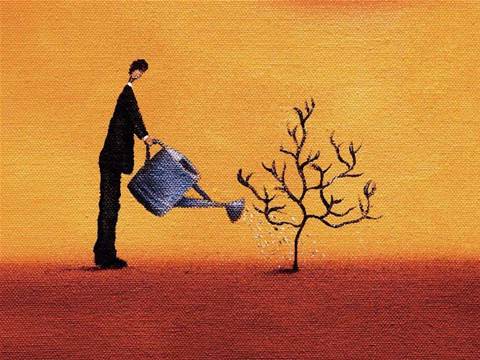 Global spending on cloud-based software will scale beyond US$100 billion over the next year in a mature but heavily fragmented market that still significantly lags its on-premises counterpart.

A recent analysis by Synergy Research tabulated that Software-as-a-Service generated $23 billion in Q1 revenue and is growing almost 30 percent annually as it displaces licensed software in the enterprise.

Microsoft, which overtook Salesforce as the SaaS kingpin in 2016, has expanded its lead in the years since. The world's largest software company holds roughly 17 percent of the market—a share that should continue to expand thanks to solid growth of 34 percent over the past four quarters.

The company, with its Office 365 suite, is benefiting from the fast-growing collaboration software category.

Adobe, having undertaken a major transformation to SaaS of a portfolio geared for creative professionals and marketers, rounds out the top 3 with 10 percent share, followed by a near dead heat at almost 7 percent between traditional rivals SAP and Oracle. SAP is growing faster than any of the leaders at 39 percent—Adobe and Oracle notched, respectively, 29 and 25 percent annual growth.

Those five leaders account for more than half the total SaaS market.

Google, ServiceNow and Workday are the fastest growers in the category of 10 that trail them, which also boasts big names like Cisco and IBM.

All the SaaS vendors can basically be positioned in one of three camps, according to Dinsdale.

Traditional enterprise software vendors like Microsoft, SAP, Adobe and Oracle are converting large bases of on-premises customers to SaaS subscriptions. While that camp represents most of the dominant SaaS players, those companies generally aren't growing as fast as born-in-the-cloud vendors and large services providers expanding into new software markets.

Salesforce may be the only born-in-the-cloud vendor to crack the top 5 in market share, but smaller companies in that category---including Workday, Zendesk, ServiceNow, Atlassian and Spunk—are the ones seeing rapid revenue expansion.

Software-as-a-Service only accounts for a little more than 20 percent of total enterprise spending on software, which means "growth will remain buoyant for many years to come," Dinsdale noted.

The application layer of the cloud stack remains a much larger market than IaaS and PaaS, though Synergy estimates those more-foundational layers could overtake SaaS by 2023.

"There will be consolidation, with the impending Salesforce acquisition of Tableau Software being a prime example, but there will remain many opportunities for new market entrants to make an impact," Dinsdale said.

Grow your software revenue by selling these 5 affordable, essential tools for the modern workplace
By Joseph Tsidulko
Jun 30 2019
5:02PM