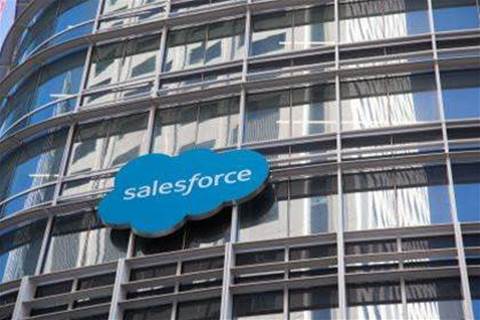 Salesforce CEO Marc Benioff on Wednesday said Salesforce is “the fastest-growing enterprise software company ever” with success from organic growth plus the recently closed acquisition of collaboration application Slack for about US$28 billion.

“We’re the fastest growing enterprise software company ever,” Benioff told listeners on the company’s second-quarter earnings call, which was held this week. “You know that. You’re tracking us. You see where the numbers are going. You can see what the trajectory is, the velocity of the company, both in revenue and margin. And now you can also see that no other software company of our size and scale is really performing at this level.”

The customer relationship management software firm’s milestones for the past three months include its first quarter to exceed US$6 billion in sales, up 23 percent year over year. Salesforce saw the “largest ever deal, based on new annual recurring revenue” in the US -- with a client in the public sector, Salesforce chief revenue officer Gavin Patterson told listeners -- and the start of deals including Slack, whose acquisition closed on 21 July.

The number of paid Slack customers spending greater than US$100,000 annually accelerated during the quarter up 41 percent, Salesforce chief financial officer Amy Weaver said on the call.

Patterson said that the company’s sales teams have been using Slack to actually close deals, providing customers real-time demos of what they are buying.

“We are beginning to sell through Slack,” he said. “The most powerful presentation sales teams give are often Salesforce on Salesforce. And so, Slack on Slack is a very compelling way to explain how we use the product. We‘re beginning to do more and more of that.”

“We‘re leaning in to close deals through closing the deal itself on Slack, creating channels between us and the customer and ensuring that everybody who’s working on the deal can have real time access to those channels,” he continued. “It means that deals close much more quickly. In fact, the Slack deal itself was closed on Slack.”

On 17 August, Salesforce announced new integrations with Slack under the platform name of “Slack-First Customer 360,” according to a company statement. Among the integrations are digital deal roms allowing sales representatives to update Salesforce records and meeting information from Slack; automated daily briefings in Slack; the ability to create Slack channels for service teams to collaborate on complex cases; direct sharing into Slack of insights from Marketing Cloud and Datorama and Slack notifications connected to Tableau data that need actions.

Slack will bring “a whole new dimension to Salesforce” due to collaboration apps acting as the front-end for how employees do work in 2021.

“There could not be a more relevant product at a more relevant time for every single one of our customers,” he said. “If you talk to any CEO, read the headline of any paper or even look around the home office most of you are sitting there right now, you can see the depth of the transformation work has gone through this year. Sales meetings have moved from conference rooms to Slack and to Zoom. Contact centres used to be buildings, and now they exist entirely in the cloud. My commute is moved from the highway to primarily my hallway. Slack is at the centre of this. Slack is how organizations all around the world are finding success in this all-digital work in your world. It‘s your digital HQ. It connects your employees, your partners, your customers on a single platform, and a platform that people love to use.”

One trend fuelling the company’s growth is the continued investment in remote working even more than a year since the start of the global pandemic, Taylor said.

“We‘ve opened half of our offices but, as you can imagine, not as many people are signed up as we’d hoped at this point because of this pandemic,” Taylor said. “I started two companies, and I started by planning my office space. Now if you’re starting a company, you start by planning your digital HQ. And that’s really what we want to bring to every company in the world -- help them build the digital infrastructure to help them succeed in this new normal.”

“Our seven-figure deals on average included more than four and a half clouds,” she said. “The number of seven-figure deals including five or more clouds grew by 29 percent year over year, showing continued momentum in our enterprise deals.”

“We are continuing to build on what we learned during the pandemic about how we can work effectively in a digital first or a hybrid environment,” she continued. “Some examples of that: virtual go to market motion, sales enablement, which is largely virtual at this point, through digital, and also a renewed emphasis on financial automation, which I believe will pay off in the long run.”

Subscription and support sales were US$5.9 billion, up 22 percent year over year.

Taylor said that Industry Cloud grew 58 percent year over year in annual recurring revenue. Four of the top 10 deals in the second quarter came from the public sector.

The company’s “platform and other” division saw sales of US$1.9 million, an increase of 24 percent year over year. Subscription and support sales from Tableau and MuleSoft combined represented 42 percent of those sales.

“Tableau is in nine of our top 10 deals this quarter,” Taylor said. “MuleSoft was in eight of our top ten deals.”

“Slack comes up in every single one of my customer conversations, and I could not be more thrilled with the momentum in the business,” Taylor said.