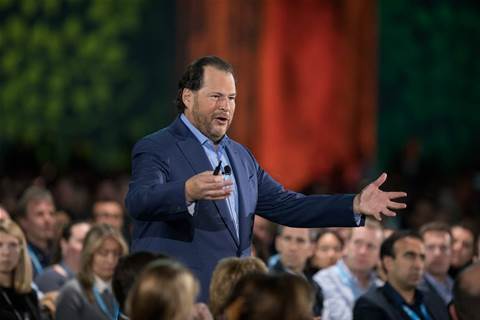 Salesforce CEO Marc Benioff laid out the company’s three-stage roadmap toward “the new normal” in the company’s Q2 earnings call on Thursday.

Noting he was speaking from his home rather than the top floor of Salesforce Tower in San Francisco, Benioff told investors the COVID-19 pandemic has revealed the culture and core values of all companies.

As the outbreak ravaged the global economy over the last fiscal quarter, Salesforce rapidly took action to invest in aiding all its stakeholders, Benioff said.

That first 90 days was all about rapid response. That meant closing 160 offices around the world at a moment’s notice and guiding 52,000 employees to work from home while pledging no significant layoffs across that workforce. As a cloud-first company, the transition was extremely smooth, and Salesforce leaders quickly saw they could run the company from anywhere, he said.

The country is now entering the second phase of that process—reopening safely.

That includes transitioning major events, like the Dreamforce conference slated for November, to a virtual affair. (Salesforce CFO Mark Hawkins noted that all event contracts that included cancellation fees--at a cost of roughly US$65 million--were expended in the second quarter, weighing on profits. Salesforce is working to renegotiate some contracts and could get some of that money back.)

The third phase, which Benioff said he believes we will start entering next year, “is about a new normal.”

“Everybody is going to have to adopt new ways” of running their businesses, he said, from customer relationships to sales motions to back-end operations.

“Every company is going to need to digitally transform,” Benioff added.

But as Salesforce transitioned to navigating a crisis, and it shifted focus to coronavirus-related projects like Work.com and Salesforce Care, it never slowed investing in its core technologies and empowering customers.

“Even with employees working at home, our culture of innovation continues to thrive,” Benioff said. Salesforce continues deploying new products to help customers at an extremely challenging time for them.

Benioff said he’s inspired by how his teams have delivered strong bookings and pipeline numbers through difficult times, including a large deal with US telco AT&T.

“This was the best of Salesforce,” he said. “This is the best I’ve ever seen Salesforce perform.”

But the financials for the quarter ended April 30 weren’t as pleasing to Wall Street.

While Salesforce revenue grew 30 percent to US$4.87 billion, largely in line with forecasts, the company offered weaker guidance—between US$4.89 and US$4.90 billion—than investors had hoped for.

Non-GAAP earnings-per-share of 70 cents were a smidge higher than the 69 cents predicted by a FactSet survey of analysts.

Salesforce stock sank 3.12 percent in after-hours trading Thursday to US$175.45.

Benioff noted that the coronavirus crisis has been unique in how it has unevenly impacted various sectors of the economy.

“Some industries will take some time for them to recover. For other industries this is actually an accelerant,” he said.

Benioff also welcomed to the earnings call Gavin Patterson, a former BT Group plc CEO who was named president and CEO of Salesforce International when Keith Block stepped down from that position in February. Patterson's role was recently upgraded to Salesforce president.