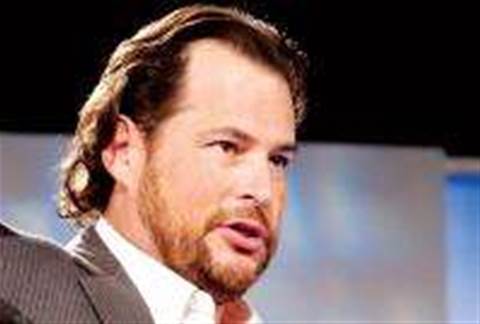 After weeks of speculation about a potential acquisition, Salesforce founder and CEO Marc Benioff led an earnings call last week that delivered strong quarterly results exceeding Wall Street's expectations, and even stronger gibes at Oracle and SAP, rivals that some analysts imagined were looking to buy the CRM leader.

For a CEO supposedly looking to bow out, Benioff was extremely forward-looking throughout the call, laser-focused on Salesforce's growth, meeting future milestones and besting competitors.

Benioff told investors he has set his sights on the goal of becoming a US$10 billion company at record speed - and then overtaking SAP.

"Soon we will be fourth-biggest software company in the world. When that happens, we are really targeting one company to surpass, which is SAP," Benioff said. "I am personally committed to making that happen. That’s my dream."

Fortunately for Salesforce, Benioff said, it wasn't going to be a hard task to accomplish, thanks to SAP's "lack of innovation and execution", which "makes them an easy target."

McDermott's remarks came in response to speculation that SAP was trying to buy Salesforce and execute the software industry's largest-ever merger.

But the feisty CEO didn't save his punches only for SAP. Benioff's former employer was also in his sights.

IT researcher Gartner just confirmed Salesforce was the largest CRM vendor of 2014 "while Oracle and SAP continue to fall behind", Benioff boasted. "Well, we certainly can see that from their quarter, can't we?"

Salesforce is gaining market share at the expense of those two rivals, Benioff said.

The familiar brash talk was backed by financial results.

"You can just see why I am so excited, because I am thrilled to report we just had an outstanding start to 2016," he said, asserting that none of the other top-10 software companies in the world are delivering that kind of performance.

Salesforce beat estimates by 2 cents a share in the first quarter, delivering quarterly revenue of US$1.51 billion, up almost 23 percent from the same quarter of last year and US$10 million higher than Wall Street projected. Salesforce is projecting between US$1.59 billion and US$1.6 billion in revenue for the second quarter.

On a national tour of Salesforce customers, Benioff, speaking from Chicago, proudly announced that Salesforce was raising guidance for fiscal year 2016 (which ends in January 2016) from US$6.52 billion to US$6.55 billion.

No software company has ever reached the US$6 billion mark that fast.

While Benioff pulled no punches when talking about Oracle and SAP, he adopted an entirely different tone for another cloud rival considered a likely secret suitor.

Benioff told investors his company has deepened its relationship with Microsoft, and he praised "a phenomenal demonstration of technology" the two software giants engaged in at Microsoft's recent Build and Ignite conferences.

Investors drove Salesforce shares up by 4.7 percent in after-hours trading, to $73.48, on the earnings.

Keith Block, vice chairman and president of Salesforce, told investors that the company's partner base was responsible for much of the success.

"The relationship with our global and regional SIs, it's just never been stronger," Block said.

Block also jabbed at SAP and Oracle, telling investors he's "seeing a growing trend" of their customers coming to Salesforce looking to supplement those "legacy solutions".

When asked in the Q&A session about his long-term goals in light of the acquisition rumours -- even beyond US$10 billion in revenue and passing SAP - Benioff spoke of his pride in influencing the industry through his philanthropic efforts and introducing the 1-1-1 philanthropic model after launching the company 16 years ago.

Back then it was easy meeting those charitable goals, Benioff said, "because we had no equity, no profit and no time."

While philanthropy is clearly on his mind, Benioff gave absolutely no hint of any plans or desire to cede control of his company.

Telecommunications Services
By Joseph Tsidulko
May 22 2015
8:27AM