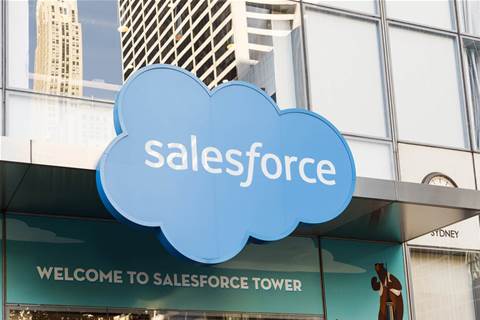 Salesforce co-CEOs Marc Benioff and Bret Taylor assured analysts on the company’s latest quarterly earnings call Tuesday that the company is resilient against a potential recession later this year while also crediting quarterly revenue growth to Slack, Sales Cloud and other products.

“We’re carefully watching the economic data – and all of you are doing that as well – and so far we’re just not seeing any material impact from the broader economic world that all of you are in,” Benioff told analysts on the call for the company’s first quarter of fiscal year 2023. The quarter ended 30 April.

The Salesforce co-founder continued: “This is a time when every company, every industry, every government is investing in digital transformation. No company is better positioned than we are to help companies transform for the digital future.”

Benioff’s optimism comes despite the Russia invasion of Ukraine, the Federal Reserve raises interest rates and the world continues to grapple with COVID-19 – all fuelling speculation over an upcoming recession.

How did Salesforce perform this quarter?

Not even Salesforce was invulnerable last quarter. The company reported a hit by foreign currency markets, causing Salesforce to lower its fiscal year 2023 guidance by US$300 million, to a new total between $31.7 billion and $31.8 billion. That revenue would still represent a 20 percent year-over-year growth if Salesforce achieves it.

Co-CEO Taylor reiterated Benioff’s comments, saying that the company’s software and its use across regions and industries makes it resilient to any negative economic downturn.

“The digital transformation trends that dramatically accelerated during the pandemic, they continue full-steam ahead despite all the volatility in the global economy,” he said.

One of the drivers of Salesforce’s sales growth was Slack – the collaboration platform that Salesforce paid $27.7 billion for last year.

The subsidiary puts Salesforce in closer competition with Microsoft, which offers the Salesforce alternative Dynamics and the Slack alternative Teams. Slack is also investing in growing its channel partner program.

Slack saw $381 million in revenue during the quarter, exceeding Salesforce’s expected $330 million, the company reported. The number of customers spending more than $100,000 a year on Slack grew 45 percent year over year.

The collaboration platform continued “to exceed our revenue expectations,” Taylor told analysts, with the past three months representing “the fourth consecutive quarter we‘ve seen more than 40 percent growth in customers spending more than $100,000 with Slack annually.”

Benioff confirmed that the company is focused on organic growth and innovation for the near future, with no major acquisitions expected. In May, Salesforce bought Troops.ai, a company that provides an integration tool for Slack and Teams.

“I would say that for right now we‘re not really looking at doing any major acquisitions,” Benioff said. “It’s just not part of our playbook right now. We‘re really focused on integrating the ones that we have. We have a lot of work to do, still. And that’s our primary focus.”

“I’m encouraged by the progress we’re making, and we have a strong pipeline for the back half of the year,” Taylor said.

In response to an analyst question on any slow down in hiring, Weaver said that the company continues to hire, “but we‘re doing it in a much more measured pace and we’re focusing the majority of our new hires on roles that will support customer success and the execution of our top priorities.”

The comments come after media reports on Microsoft potentially slowing down on new hires.

In response to CRN’s request for comment on media reports of a hiring slowdown, a Microsoft spokesperson said in an email: “As Microsoft gets ready for the new fiscal year, it is making sure the right resources are aligned to the right opportunity. Microsoft will continue to grow headcount in the year ahead and it will add additional focus to where those resources go.”

Salesforce reported $7.41 billion in revenue for the first quarter of the new fiscal year, an increase of 24 percent year over year.

The company saw 21 percent growth in the Americas, 33 percent in India and 24 percent in Asia-Pacific.

The company had $21.5 billion in current remaining performance obligation, up 21 percent year over year.

The company expects second quarter revenue of $7.69 billion to $7.7 billion, which would represent a 21 percent growth year over year. That also includes $360 million expected from Slack.

The stock traded at $174.98 after the market closed Tuesday, an increase of about 9 percent.