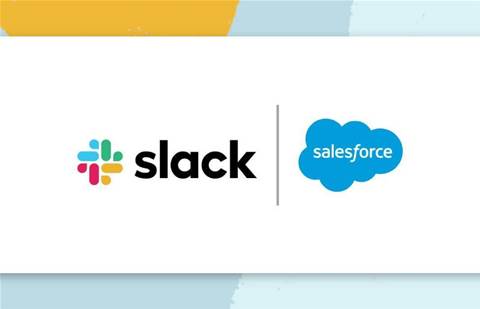 The acquisition sets up a competitive collision between Salesforce and Microsoft, whose own Teams collaboration software has gained huge market traction and user adoption this year.

Salesforce and Slack announced a definitive agreement under which Salesforce will buy Slack for US$26.79 per share in cash and 0.0776 shares of common stock. That puts the total value of the deal at US$27.7 billion.

“Stewart and his team have built one of the most beloved platforms in enterprise software history, with an incredible ecosystem around it,” said Marc Benioff, Salesforce CEO, speaking of Slack co-founder and CEO Stewart Butterfield, in a statement.

“This is a match made in heaven. Together, Salesforce and Slack will shape the future of enterprise software and transform the way everyone works in the all-digital, work-from-anywhere world. I’m thrilled to welcome Slack to the Salesforce Ohana once the transaction closes,” Benioff said.

Slack, whose stock trades on the New York Stock Exchange under the symbol WORK, has a US$25.05 billion market cap based on Tuesday’s US$43.91 per share closing price. That market cap was about US$17 billion before reports of a Salesforce acquisition began circulating.

The acquisition has been approved by both companies’ boards but remains subject to approval by Slack shareholders and required regulatory approvals and other customary closing conditions. The companies expect to complete the acquisition in Salesforce’s fiscal 2022 second quarter, which ends in July 2021.

“Salesforce started the cloud revolution, and two decades later, we are still tapping into all the possibilities it offers to transform the way we work. The opportunity we see together is massive,” Butterfield said in a statement.

“As software plays a more and more critical role in the performance of every organization, we share a vision of reduced complexity, increased power and flexibility, and ultimately a greater degree of alignment and organizational agility. Personally, I believe this is the most strategic combination in the history of software, and I can’t wait to get going,” Butterfield said.

The two companies said that Slack will be “deeply integrated into every Salesforce Cloud” and will become “the new interface for Salesforce Customer 360” – the Salesforce term for its overall platform.

Slack, based in San Francisco, was founded in 2009 and began offering its collaboration service in 2013. The collaboration tools have grown rapidly in popularity and now have more than 12 million daily active users, according to the company’s web site, and more than 119,000 paying customers.

For its fiscal 2021 second quarter (ended July 31) the company reported revenue of US$215.9 million, up 49 percent from just under US$145 million one year earlier.

Salesforce, also based in San Francisco, was one of Slack’s earliest integration partners and the two vendors have expanded and tightened their partnership over the last few years. In October 2019 the two companies announced the Salesforce for Slack application, which allows sales and services professionals to more easily access and share information from Salesforce applications within Slack.

Salesforce has made dozens acquisitions through its history, most of them small, but including several blockbusters. In August 2019 Salesforce made a major push into the business analytics space when it acquired Tableau Software for US$15.7 billion. That followed Salesforce’s 2018 acquisition of MuleSoft, a developer of cloud-based integration and API management technology, for US$6.5 billion.

Microsoft introduced Teams in 2017 and the application has become increasingly prominent in workplaces – especially gaining traction this year as the COVID-19 pandemic forced many people to work from home. In October Microsoft CEO Satya Nadella said the Teams application at that point was being used by 115 million people, a 53 percent increase just from April.

Salesforce currently offers an enterprise collaboration tool called “Chatter” that is part of the Salesforce.com platform. The company introduced Chatter at its Dreamforce conference in 2009 and the service became generally available in 2010.

For its fiscal 2021 third quarter (ended 2020) Salesforce reported revenue of $ billion, up percent from US$4.51 billion in the third quarter of fiscal 2020. Net income for the quarter was $ compared to a US$109 million loss (due to a US$173 million provision for income taxes) from the same quarter one year earlier.