Salesforce rides the lightning with Metallica jumping on cloud 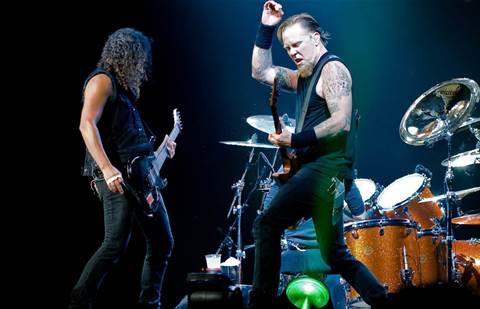 Heavy metal probably isn't the first thing that comes to mind when it comes to customer relationship management tools. But if there's any tech conference that heavy metal icons Metallica would show up to, it's probably Dreamforce.

This week, Metallica drummer Lars Ulrich has appeared at Salesforce's annual conference to discuss how the band has rolled out marketing and commerce tools for its social media platforms and website to better interact with fans.

“Music to me is about connecting people and sharing experiences together. We see technology as a way to bridge the divide between us and our fans and bring them closer," Ulrich said.

"That’s why we’re excited to be working with Salesforce to create new next level fan experiences—it’s going to be way cool!”

Watching Lars Ulrich on stage talking about how @Metallica uses @salesforce software for customer engagement and thinking that adult life hasn’t turned out exactly the way I thought it would. #Dreamforce2018 pic.twitter.com/IHbXygU7BF

The band boasts more than 60 million fans on its social media accounts, making it one of the "most social bands online" according to Salesforce.

Metallica deployed Salesforce Marketing Cloud in order to create a single view of its fans across their email, mobile and social media accounts, allowing management to create personalised content for different fans.

The band also launched a new website built with Salesforce Commerce Cloud with better merchandising tools and functionality using AI-powered e-commerce. Salesforce said this would make it easier for fans to purchase from Metallica's online store.

“When it comes to deep fan engagement there is no better band than Metallica,” said Salesforce president and chief strategy officer Alex Dayon. “With more than 60 million social media followers and millions of live performance tickets sold this year, Metallica is changing the game in connecting fan experiences across every channel to deliver experiences that are truly unique. Salesforce is thrilled to be a trusted partner on this journey.”

As well as appearing to talk about its Salesforce case study, Metallica will also perform at the Dreamfest concert to benefit UCSF Benioff Children’s Hospital as part of the Dreamforce festivities this week.