Salesforce to buy Tableau for US$15.7 billion 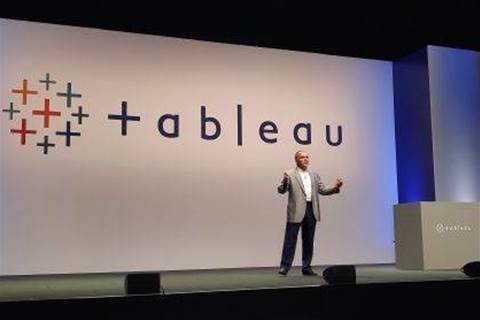 Salesforce.com has taken a major step to increase its business analytics portfolio with a deal to acquire Tableau Software, one of the leading developers of business intelligence and data visualization software, for a whopping US$15.7 billion (AU$22.5bn).

The two companies announced the deal on Monday and explained it will see Salesforce acquire publicly-held Tableau in an all-stock transaction. Salesforce will exchange 1.103 shares of its common stock, valued at $15.7 billion, for each share of Tableau's Class A and Class B common stock.

"We are bringing together the world's No. 1 CRM with the No. 1 analytics platform," said Salesforce chairman and co-CEO Marc Benioff in a statement announcing the deal. “Tableau helps people see and understand data, and Salesforce helps people engage and understand customers." The combination, he said, combines "two critical platforms that every customer needs to understand their world."

"Joining forces with Salesforce will enhance our ability to help people everywhere see and understand data," Tableau president and CEO Adam Selipsky said in the statement. "As part of the world's No. 1 CRM company, Tableau's intuitive and powerful analytics will enable millions more people to discover actionable insights across their entire organizations."

Both companies emphasized the role that CRM and business intelligence software plays in the $1.8 trillion digital transformation space and said the Salesforce-Tableau combination will position Salesforce as a major force in that market.

"Data is the foundation of every digital transformation and the addition of Tableau will accelerate our ability to deliver customer success by enabling a truly unified and powerful view across all of a customer's data," said Salesforce co-CEO Keith Block in the statement.

Salesforce and Tableau expect to complete the acquisition during Salesforce's fiscal third quarter ending Oct. 31, 2019, pending the tender of Tableau shares by the company's stockholders and subject to other customary closing conditions and regulatory approvals. The companies said that Tableau's founders: Christian Chabot, Patrick Hanrahan and Christopher Stolte, have all agreed to tender their shares.

Tableau will operate independently under its own brand following the close of the acquisition.

For the first quarter (ended March 31) of 2019 Tableau reported revenue of $282.5 million, up 15 percent from one year earlier, while its net loss nearly doubled year-over-year to $88.9 million.

Salesforce already markets its own business analytics software, the AI-based Einstein software, and the company said that with the combination of Tableau and Einstein "Salesforce will deliver the most intelligent and intuitive analytics and visualization platform for every department and every user at any company."

Cloud application revenue made easy
By Rick Whiting
Jun 11 2019
5:04AM