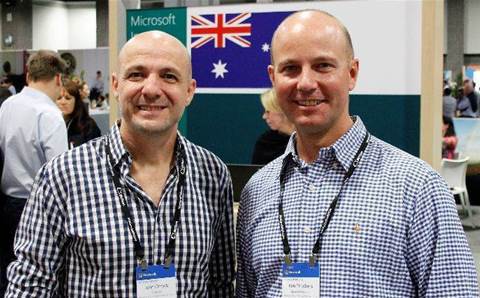 Barhead Solutions has been named Dynamics 365 APAC ISV partner of the year 12 months after the directors revealed their decision to set up a new company based on Microsoft despite a long history with Salesforce.

Ken Struthers and John Orrock, both former directors of Salesforce partner Cloud Sherpas, told CRN at last year's Worldwide Partner Conference that Dynamics 365 would prove a price challenger to Salesforce, and that Microsoft was “getting its act together in the cloud space”.

The duo were just as enthused about their new direction, speaking to CRN overnight at this year's Microsoft Inspire conference.

Struthers said the release of Dynamics had generated a lot of energy for Barhead.

“I think Microsoft’s pace has changed since Dynamics 365 came out, so suddenly there's a whole new range of excitement in the market, and Microsoft as a strategic platform, now they’re seeing CRM as a viable option on that, so the acceleration of our business has really surprised and delighted,” he said.

Microsoft this week shed some light on what its One Commercial Partner model would mean for partners’ go-to-market around cloud services across key industries like education, financial services, government, health, manufacturing and retail. With new sales and marketing units, channel manager roles and tools unveiled.

Barhead said as far as they were concerned, it had been a while coming.

“[Previously] on the Azure front they had the commercial model for resellers and ISVs to develop on the product, but Dynamics is new, but you’ll see the ISV edge being released, and that’s what we've been waiting for,” Orrock said.

Struthers added that Microsoft's re-jigging of its sales team's incentives was a better way to reward partners that actually address customer needs.

"Even aside from the ISV side, the realignment of the teams to business solutions; they’re actually changing the way the sales team is incented so their no longer just [focused on] Dynamics, it's actually business solutions,” he said.

“Microsoft is moving some of the product silos out to make sure the outcome is right for the customer, which is how we’ve been working anyway.

"Dynamics might be engine behind the scenes, and while we might have a Power BI or an Azure cognitive service or even and Office lead into that, they are now changing so that Microsoft will start selling that way as well which is really enabling the whole power of the stack into the market which has probably been missing until this restructure.”

Looking ahead, Barhead will work on developing and delivering new capability to the market, with plans to go deeper into financial services, some work in the bot framework and a concerted effort to push out new work in Power BI and analytics.

“I think it's going to be a very exciting time over the next 12 months, for us as a Dynamics partner. The platform is improving significantly we are constantly reinvesting and now they’re aligning the way they go to market to actually deliver business solutions based on the platform, we’re going to be right there with them,” Struthers said.

The journalist travelled to Inspire as a guest of Microsoft