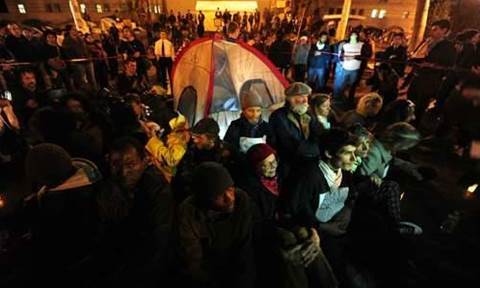 From the Occupy movements to a 22-year-old nanny squashing a major national bank's push to add debit card fees, social networking has changed society. Like it or not, it's happening, said Salesforce CEO and Chairman Marc Benioff Wednesday as he kicked off Cloudforce New York.

"The new era that we're in is a social revolution," Benioff said. "The social revolution is affecting more users and bringing more of us into a new level of computing than we have ever seen."

Benioff pointed to a cryptic online ad featuring a ballerina dancing atop a Wall Street bull and the question, "What is our one demand?" then little more than the Occupy Wall Street hashtag, a date and "bring tent." He told the story of 22-year-old Molly Katchpole and her social media crusade to thwart Bank of America's attempt to institute a $US5 ($A4.85) monthly debit card usage fee -- "She's a 22-year-old nanny and she brought down the Bank of America," Benioff exclaimed.

He discussed the social media blowback faced by Netflix with the unveiling of its price changes and the short-lived Qwikster name change, which led to more than 80,000 negative comments on the CEO's blog. All of these movements, Benioff said, gained traction via social networking platforms and showcase the increasing importance of social media.

Benioff also cited the Arab Spring and how social media is being used in successful social uprisings and other movements. He showed photos of citizens of various global nations holding signs thanking Facebook for providing the platform on which they can speak out, collaborate and organise, illustrating the societal impact social media and technology now have.

The power of social media, Benioff said, can no longer be ignored. Customers and employees are leveraging some form of social media platform, and it's time for the enterprise to get on board with the social enterprise, or get left behind.

Benioff pointed to a handful of key stats to highlight the social and mobile explosion: 1.7 billion social enterprises users, which eclipsed e-mail; 20 percent of the internet is social; users spend 4 hours per month on Facebook; mobile apps are used more than Web browsers; and come 2013 there will be 1.6 mobile devices globally.

"But it's not just about the consumer, it's about the enterprise," he said, and Salesforce is pushing its social enterprise vision to bring corporations and organizations into the social revolution. Enterprises, he said, must overcome the social divide where their customers and employees have embraced social platforms, but the corporation itself is reluctant. "Embrace social media, or be affected by it," he added.

Social, though, creates a new paradigm for enterprises to wrap their arms around. Broken down, Benioff said social stands for speed, open and transparent, collaboration, individual, alignment and leaderless. And it's tied together by the cloud.

"We were born cloud at Salesforce.com, but we were reborn social," he said, later adding, "At the core, the social enterprise is the cloud. It's fast, it's easy, it's open and it's for everyone," he said.

But not everyone is ready, Benioff cautioned.

"Not everybody is on the social revolution. Not everyone is on board," he said. "But our employees are in it, our customers are in it. They're accelerating what products are successful. But it's a social divide. What about our products? How do we cross the gap of business performance? How do our enterprises bridge this social divide?"

Across its portfolio, which now includes Database.com, Chatter, Force.com, Heroku and Radian6, Benioff said Salesforce can create a social enterprise for any type of company and fulfill those three key steps.

"We want to inspire you. We want to motivate you … We want to show you what's possible," he said.

Benioff brought out a host of customers to showcase their respective leaps into the social enterprise, from Facebook to GE Capital to Burberry to Toyota to show how their engaging employees and customers via social tools feeding into their Salesforce environments.

Benioff said Salesforce has embraced the social revolution and is working to bridge the social divide, and it's time for enterprises to join the party. Benioff said the world has entered into "a new level of what's possible" in business and in general.

"There's a new world and a new opportunity that's unfolding for all of us," he said.