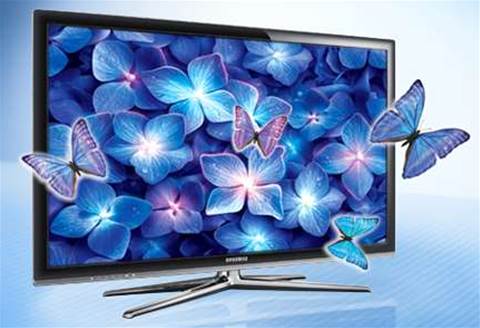 Linked gallery: In pictures: Inside Samsung's universe of devices

Samsung have beaten Sony and Panasonic to the shop floor, with the first 3D televisions on sale in the country.

The 200Hz Samsung 3D TVs will be available in both plasma and LED versions and in sizes from 40in to 60in, with prices starting at $2500.

Each Samsung 3D TV will come with two pairs of proprietary active shutter style 3D glasses that will not work with other TV brands.

A number of big name retailers, including Harvey Norman, the Good Guys and JB HiFi will sell the TVs.

The timing couldn't be better for Samsung, with plans worldwide to air games in the 2010 Football World Cup in 3D, including live outdoor screenings events hosted by Sony, though no word yet on 3D broadcasts of games into Australian homes.

However, at today's Australia-first demonstration of the 3D technology, only Dreamworks' (one of Samsung's key partners in Hollywood) Monsters vs. Aliens was available for viewing purposes. The film is often lauded as the one of the better examples of 3D moviemaking, though we'll reserve our final verdict for when we've had a chance to have a more in-depth viewing.

Apart from select TV programming and promises by Foxtel to deliver 3D channels, there is a notable shortage of 3D Blu-Ray content avaliable. Samsung management say they expect early adopters to make the initial purchase - perhaps out of curiosity we think, especially after the Avatar cinema experience.

A recent Variety interview with Jeffrey Katzenberg has revealed that at least one Hollywood executive is worried about poor quality 2D to 3D conversions, which might turn people off the relative thrills of 3D.

Being first to market, Samsung are in a strong position to capitalise on the pent up demand created by the likes of Avatar. But it's a chicken and egg scenario - a lack of quality 3D titles and still no Avatar 3D Blu-Ray release date threatens to put a dampener on 3D TV sales.