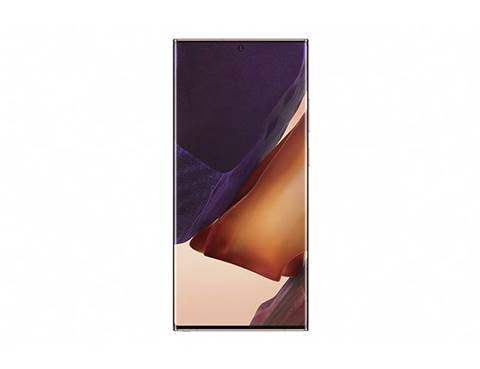 Samsung is unveiling two Galaxy Note 20 devices that feature support for both types of 5G along with stylus, performance and camera improvements.

Other new additions include support for ultra wideband connectivity as well as wireless support for accessing the DeX Android desktop.

It’s the second year in a row that Samsung has divided its Galaxy Note launch into a pair of devices. This year, the devices will be the Galaxy Note 20 and the Galaxy Note 20 Ultra--the latter of which includes a number of higher-end specs and a $300 higher starting price.

For the smaller model in the new series, the Galaxy Note 20 will feature a 6.7-inch display with FHD+ resolution. The Note 20 will come in three colors -- mystic gray, mystic green and mystic bronze – with a matching S Pen stylus.

The Galaxy Note 20 Ultra will offer a display that is not that much larger than the base model, at 6.9 inches, but does offer higher resolution at WQHD+. The Note 20 Ultra also offers a higher refresh rate, 120hz, for smoother display motion (compared to 60hz on the Note 20).

For colors, the Note 20 Ultra will be offered in mystic bronze, mystic black or mystic white.

For the S Pen, the stylus that‘s housed inside the Note, Samsung has made several improvements. Those include reduced latency for a more natural “pen to paper” type of feeling, according to the company.In the Notes App, meanwhile, the S Pen can now be used to annotate PDF files, which can be imported directly into the app.

Samsung has also expanded the “air actions” that are available through gestures with the S Pen. Air actions enabled with the stylus now include move backward, home, move forward, recent app and screen capture.

One new addition to the Note lineup with the Galaxy Note 20 series is the introduction of “ultra wideband” technology. Ultra wideband enables several capabilities, one of which is the ability to share files with another device just by pointing at it. The technology also will enable the Note 20 devices to serve as a digital key for gaining building access or going through an office turnstyle, Samsung said.

Samsung is continuing to emphasize high-speed 5G connectivity in its new device releases with the Note 20 series. This time, Samsung is getting even more aggressive, in fact – with both versions of the Note 20 including support for both variants of 5G. That is, the Galaxy Note 20 devices will support both sub-6GHz 5G connectivity and the higher-speed variant—known as millimeter-wave 5G.

It’s the first time that Samsung is offering both types of 5G support in all the new devices in a Galaxy series launch. By contrast, only two of the three devices in the Galaxy S20 series featured millimeter-wave 5G (with the Galaxy S20 offering only sub-6GHz).

Samsung has continued to support, and improve, its DeX capability with the launch of the Galaxy Note 20 series. DeX lets users pull up an Android desktop on a separate display or PC that is powered by their Galaxy device--allowing users to potentially have just one device for all of their computing needs. For last year’s launch of the Note 10 series, Samsung enabled users to access DeX just by plugging the phone into a Windows PC or a Mac (using an included USB-C to USB-C cable). With the Galaxy Note 20 series, DeX is now going wireless for the first time; Samsung says Note 20 users will be able to pull up DeX wirelessly on Smart TVs (or on devices that support wireless Miracast connectivity).

Pre-orders for the Galaxy Note 20 and Note 20 Ultra start on Thursday, Aug. 6. The devices will begin shipping on Aug. 20.