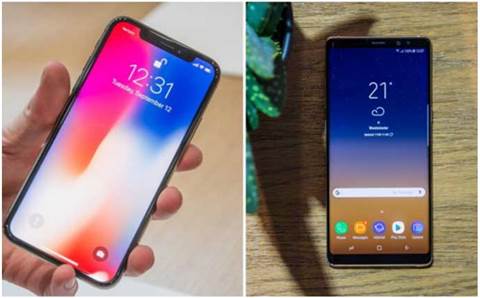 Apple iPhone X or Samsung Galaxy Note 8? That's a question many have wondered, few have attempted to answer, until now.

There's still some time until the iPhone X becomes available, so we won't be able to go into deep benchmark territory just yet. However, we've compared both phones to help you decide which one is the device for you.

The Samsung Galaxy Note 8 is already available. It launched mid-September at $1499 for 64GB and, at the time, was considered to be an absurdly expensive phone. That's when Apple rolled into town announced the iPhone X would arrive on 3 November priced at $1579.

In terms of design, the iPhone X is certainly a head-turner – namely because it's the first time in a while that Apple has departed from its standard design template.

The most notable aspect of the iPhone X's design is its use of an edge-to-edge screen with curved edges, similar to that of the Xiaomi Mi Mix or Samsung's Edge variety of Galaxy phones. Along the top is a little annoying black notch that houses Apple's facial-recognition technology and the iPhone X's selfie camera.

The iPhone X is somewhat blockier than the iPhone 8, sporting a glass back and an aluminium body. It also has a vertical dual-camera setup on the rear and no return of the headphone port. 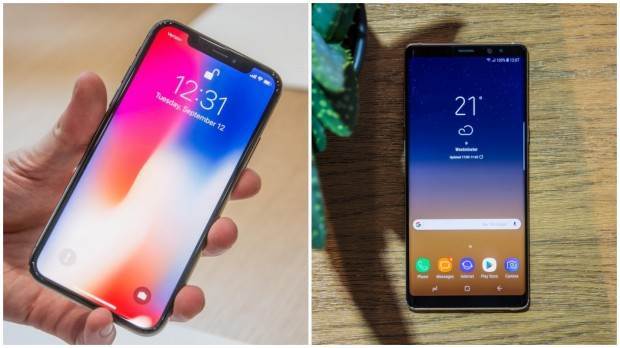 The Samsung Galaxy Note 8 adopts a look that's very similar to that of the Samsung Galaxy S8 and S8 Plus. You've got the curved edge-to-edge display with a new 18.5:9 ratio, along with a super-slim design and metal back with rear-mounted fingerprint reader and dual-camera setup. Because of Samsung's incredible screen technology, the Note 8 isn't actually that much bigger to hold than the Samsung Galaxy S8+, making it perfectly viable for use with one hand despite its huge screen.

Samsung's Galaxy Note 8 has a gorgeous 6.3in Super AMOLED QHD+ display with perfect contrast and 98.2 percent coverage of the sRGB colour gamut space. It's one of the best screens you'll find on a smartphone and, as with all Samsung's flagships, it's far better than any other display on the market.

The iPhone X, however, makes use of a Samsung-developed edge-to-edge display. This means the entire front face of the iPhone X is a screen, giving it a 5.8in “Super Retina” AMOLED display backed by Apple's True Tone technology. We won't be able to dive into exactly how good it is until we can benchmark it, but as it's made by Samsung, it's likely to be comparable to that of the Note 8 – although Apple's True Tone tech may mean it's not quite as colour-accurate.

The iPhone X is powered by the same A11 Bionic chip found in the iPhone 8 and iPhone 8 Plus. You can imagine the iPhone X may not feel quite as nippy as the iPhone 8 since it has to throw around more pixels onscreen at any given time. In typical Apple fashion, we don't know how much RAM or battery capacity the iPhone X has – aside from a promise that it lasts two hours longer than the iPhone 7 – but it's presumably enough to keep Apple users satisfied. 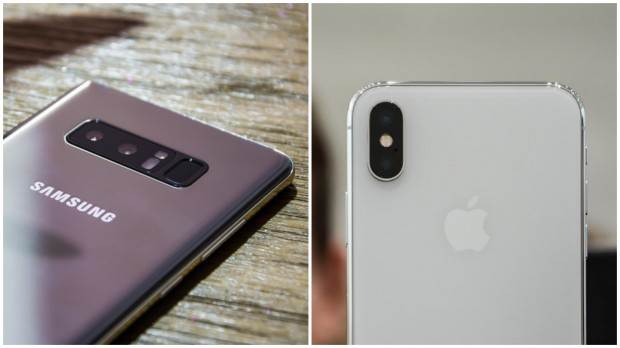 On the iPhone X's rear, you'll find a dual-camera setup with optical image stabilisation. Both cameras are 12-megapixel in size, but one is a wide-angled f/2.4 and the other a portrait f/1.8. Both use sapphire crystal lenses to stop scratches. The front-facing camera is the same 7-megapixel camera found on the iPhone 8.

The Samsung Galaxy Note 8 is equipped with 6GB of RAM and Samsung's Exynos 8835 chip (or a Snapdragon 835 if you live in the US). In terms of our benchmarks, the Exynos blew all other handsets out of the water, and sat on par with the Samsung Galaxy S8 and S8+ – both of which use the same processor.

In the camera department, the Note 8 comes with a dual-camera setup on its rear with one wide-angle 12-megapixel f/1.7 camera and another 12-megapixel f/2.4 telephoto camera with 2x optical zoom. Both cameras come with optical image stabilisation and produce some stunning images.

Both Samsung and Apple's camera setup also have the ability of “Live Focus” – something Apple touted as being its own tech. Live Focus is, essentially a bokeh-like-effect on images, helping bring a subject into focus – you can adjust the amount of blur you want while setting up your shot, or edit it in post if you don't fancy the final look.

The Samsung Galaxy Note 8 also comes with 64GB of storage, which can be upgraded by another 256GB with the addition of a microSD card. The iPhone X only comes in 64GB or 256GB and has no options for expandable storage. 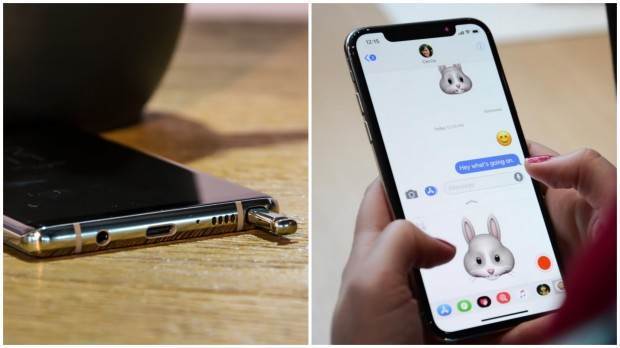 On the feature front, both phones are absolutely packed with new gimmicks to wile away your time with. The Galaxy Note 8 comes with Samsung's smart assistant Bixby installed as standard, and features the same iris-scanning tech and fingerprint reader Samsung has employed in the last handful of its phones.

The big draw for phablet fans is Samsung's new S Pen stylus for the Note 8. Not only does it function in the same way as before, but it can now be used to jot down notes on the screen while it's turned off. This means you're always carrying a notepad with you, and can jot down quick ideas even if you don't have the time to turn on your phone and find a notes app. Handwriting and doodles can also be turned into GIFs and even emoji. You can also highlight a sentence to see it translated instantly, or convert currency in the same manner – brilliant for travellers.

The iPhone X's big feature, aside from its edge-to-edge display, is its Face ID tech. By using facial recognition, Apple has ditched its Touch ID technology to allow you to unlock your phone just by using your face.

Apple sells this as a great way to authorise payments via Apple Pay (although you'll appear even ruder by staring at your phone instead of the person serving you), and Face ID is smart enough to learn your face “even if you decide to change your hairstyle”. Face ID also allows for a creepy emoji feature called Animojis. Animojis allow you to map your face onto an emoji and pull stupid faces and send them to friends and family.

As with any comparison between an iPhone and any Android smartphone, the question you really want answering is “do I want to use iOS or Android?” If you don't know the answer to that, and you're basing it on features alone, you're definitely better off with the Samsung Galaxy Note 8.

Based on what we currently know, our scales are tipping towards the Galaxy Note 8.