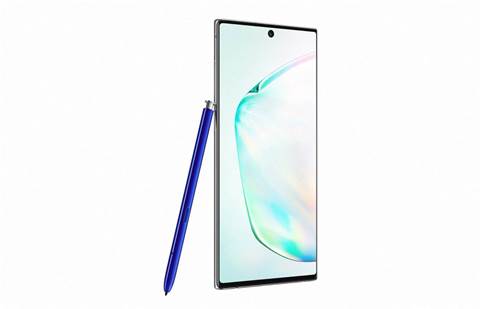 Samsung is continuing to launch new business-friendly features in the smartphone form factor with the latest update to its Note series, the Galaxy Note10.

This time around, the device maker is debuting the new Note in two display sizes--the first time Samsung has done this with the Note--while a third variant is being released that supports high-speed 5G connectivity.

The options for an additional display size and 5G capabilities--along with other new features, such as easier connectivity from the phone to the DeX Android desktop--demonstrate that Samsung continues to bring out new business-friendly features into its Galaxy smartphones, said Samsung mobile channel chief Mike Coleman.

"We're accelerating the delivery of B2B-like devices that can solve real business problems," Coleman said in an interview with CRN. "I think this is the next in a long line of technological innovations that our partners can't afford not to embrace."

For DeX--which lets users pull up an Android desktop on compatible screens just by plugging in their device--the Note10 simplifies the usage significantly, Samsung said. Now, users can access their DeX desktop on a PC (Windows 10 or Windows 7) or Mac by plugging into the computer using a USB-C to USB-C cable that is included with the Note10.

That way, users will have the option to access a keyboard or mouse in situations where they need one--potentially allowing them to do without the need for a laptop, Coleman said. Users have the ability to move files back and forth, and can use DeX in full screen mode on the PC or Mac, according to Samsung.

On performance, the Note10 and Note10+ in the U.S. will move up to the Qualcomm Snapdragon 855, a 7-nanometer, 8-core processor with a clock speed of up to 2.84GHz. The chip will enable CPU performance gains of 33 percent and 42-percent faster GPU over the Note9, Samsung said.

The devices will also use their batteries more efficiently through the inclusion of the Snapdragon 855 processor and through artificial intelligence technologies, Samsung said. The AI technologies will learn how users consume battery life and provide adjustments, such as automatically closing a power-hungry app when it's no longer in use, the company said.

For the S Pen, the stylus that's housed inside the Note, Samsung has retooled the design to make it more durable.

The company has also opened an SDK to allow third-party developers to create new features for apps using the S Pen. Coleman gave the example of enabling the S Pen to open a deliveries application with a button click, with the stylus then being used to sign for the delivery.

“I think it’s a good move. The more openness, the better,” Nielsen said.

Handwritten notes in the app can now be converted into text on the Note10--with Samsung saying it's invested significantly in handwriting recognition technologies. After the handwriting is converted to text, that text can now also be exported to formats including Microsoft Word.

"We are starting to get some significant scale [with channel partners] and we'll continue to accelerate that for the foreseeable future," Coleman said.

Samsung, he said, is "enjoying an influx of new partners that are really focused on mobility solutions, to really drive solutions through their end customers, using and harnessing the power of Samsung devices."