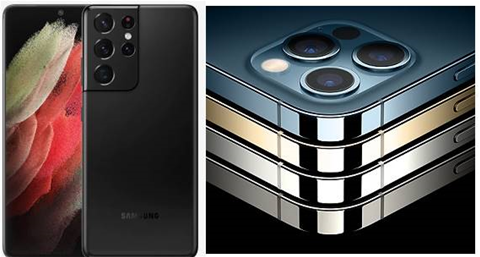 We’re getting the new Samsung Galaxy S series devices a bit earlier this year, with Samsung timing its annual announcement to coincide with CES 2021 rather than waiting for Mobile World Congress (which was delayed until late June this year).

Along with sporting huge vibrant displays, both devices feature advanced cameras, 5G connectivity, strong battery life and processing power and even some redesigned elements on the exterior of the phones.

Which of the phones in our iPhone versus Galaxy face off is the best fit for you? In the following slides, we compare the new Samsung Galaxy S21 Ultra vs Apple’s iPhone 12 Pro Max on specs, features and price.

As part of the 2021 redesign, Samsung has slightly decreased the display size on the Galaxy S21 Ultra—with its display measuring 6.8 inches, down from 6.9 inches on last year’s Galaxy S20 Ultra. The Galaxy S21 Ultra will offer up to 1,500 nits of brightness, as well as automatic adjustment for the refresh rate (between 10Hz and 120Hz) to optimize both viewing quality and battery life. In addition, a new display feature for the Galaxy S21 Ultra is the inclusion of “Eye Comfort Shield” technology for automatically adjusting blue light levels (based on the time of day) to reduce fatigue on the eyes.

The biggest difference that users may notice between the two displays is the Galaxy S21 Ultra’s 120Hz refresh rate for smoother display motion. The feature is most obvious when playing games, but it also provides a smoother experience overall, such as when scrolling web pages. Despite rumors that the iPhone 12 Pro Max was going to move up to a 120Hz refresh rate, Apple ended up sticking with the usual 60Hz refresh rate for the device. With the iPhone 12 series, including the iPhone 12 Pro Max, the devices got a design overhaul that makes them a lot boxier than they used to be. The iPhone 12 Pro Max now has a squared-off, flat-edge appearance, in contrast to the curved edges of prior generations of iPhones (dating all the way back to 2014’s iPhone 6). The new iPhone 12 Pro Max design also removes the border that had separated the stainless steel body and the display—making the body and glass flush. With the addition of 5G support in the iPhone 12 series models, Apple has finally caught up to Samsung—which has launched numerous Galaxy phones with 5G support since mid-2019. And the Galaxy S21 Ultra is no different. In terms of the specific type of 5G service that is supported by the devices, the Galaxy S21 Ultra and iPhone 12 Pro Max will support both of the major 5G variants. That is, the two phones both support sub-6GHz 5G connectivity—which is more widely available—as well as the higher-speed 5G service, known as millimetre-wave (or mmWave).

The fifth-generation cellular technology can deliver data rates of 10 to 100 times faster than current 4G networks, which will greatly improve user experience and the performance of use cases that are already in existence, said Drew Blackard, vice president of mobile product management for Samsung Electronics America, during CES 2021. On performance, users should find little to complain about with the two phones. The Galaxy S21 Ultra is powered by Qualcomm’s new Snapdragon 888, an eight-core chip with a clock speed of up to 2.8GHz. The iPhone 12 Pro Max is powered by the A14 Bionic chip, which includes a six-core CPU—and which Apple is calling the “fastest chip in a smartphone.” CPU performance can reach as much as 50 percent faster speeds than “the fastest competing smartphone chips,” according to Apple. However, initial Geekbench 5 benchmark scores reported online only suggest a modest performance advantage for the A14 Bionic over the Snapdragon 888.

In terms of RAM and storage options, the Galaxy S21 Ultra will have three configuration choices—all with a massive amount of RAM. The options are for 12 GB of RAM with either 128 GB or 256 GB of internal storage, or 16 GB of RAM with 512 GB of storage. Buyers of the iPhone 12 Pro Max can choose between variants with 128 GB, 256 GB or 512 GB of internal storage, while the device comes with a reported 6 GB of RAM. On the camera system, the Galaxy S21 Ultra will expand to a quad-camera setup on the rear, from three cameras on the S20 Ultra. The quad-camera system will retain the 108-megapixel wide-angle and 12-megapixel ultrawide sensors of the S20 Ultra, but will swap in a pair of 10-megapixel telephoto cameras in place of last year’s 48-megapixel telephoto lens. For zooming purposes, the S21 Ultra camera system will offer “space” zoom of up to 100X as a new zoom lock feature that provides clearer photos by compensating for shaky hands while zooming.

The iPhone 12 Pro Max features a triple rear camera system of ultrawide, wide and telephoto cameras, with 12 megapixels on each camera. The wide camera, which comes with an improved ƒ/1.6 aperture, is new in the iPhone 12 Pro Max. The device also includes a large sensor on its wide camera—enabling better photos in low light—and 5X optical zoom.

Apple and Samsung don’t make it easy to compare their devices on battery life. Apple provides a moderately useful metric, up to 20 hours of video playback, for the iPhone 12 Pro Max. But Samsung doesn’t want to make any promises on hours of usage for the Galaxy S21 Ultra—instead pointing to the fact that the device has a huge battery, 5,000 mAh, to demonstrate its battery life capabilities. The redesign on the iPhone 12 Pro Max has also improved durability. The display features what Apple is calling “Ceramic Shield” material, which involves using high- temperature crystallization to improve toughness. The drop protection on the iPhone 12 Pro Max is now 4X better, Apple said. Meanwhile, the device supports magnetically attachable MagSafe accessories. The accessories can snap onto the back of the phone, as a new way to provide wireless charging.

Pre-orders for the Samsung Galaxy S21 Ultra have begun, with the device shipping on Jan. 29.

Samsung has reduced the starting prices for the Galaxy S21 series by $50 compared with the pricing for last year’s Galaxy S20 series. For the Galaxy S21 Ultra, pricing starts at $1849.99— compared with $1999 for last year’s S20 Ultra model. Apple’s iPhone 12 Pro Max is for once, not the more expensive option here. Apple’s starting iPhone 12 Pro Max price is $1849. Both devices start with 128 GB of internal storage.

Grow your software revenue by selling these 5 affordable, essential tools for the modern workplace
By Kyle Alspach
Jan 19 2021
11:16AM