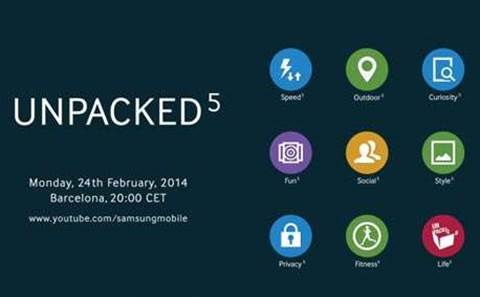 Samsung's Unpacked event is almost upon us, and with it the widely-anticipated launch of the Galaxy S5 smartphone.

Now Samsung's released a teaser image on its blog that points to a redesign for the phone's TouchWiz UI. The teaser shows a grid of circular icons with a flat colour design, reminiscent of Apple's iOS 7. Blue icons include Speed, Privacy and Curiosity, while green icons include Outdoor, Style and Fitness – though it's likely that those won't be the names used on the actual Galaxy S5 device.

Rumours are flying thick and fast about the Galaxy S5's spec sheet, with the New York Times's sources claiming that it'll be an incremental update with a faster processor and an updated version of its Knox security software (a rumour that's backed up by the prominence given to privacy on Sammy's teaser image).

Other, more excitable sources have claimed that Samsung will release two variants of the phone – a premium "Prime" model packed with everything from a fingerprint-reading quad HD screen to iris scanning technology, and a plastic model with more modest specs.

Whatever the case, we only have until 24 February and Samsung's Unpacked event to find out exactly what it has in store for us.