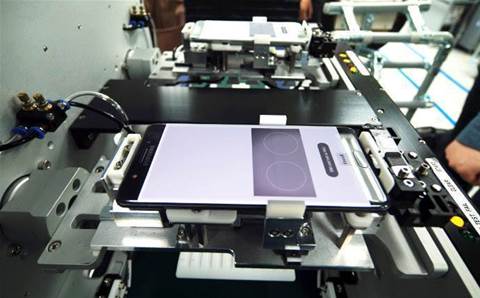 Samsung has formally opened a new factory in India, which the South Korean tech group says is the world's biggest mobile phone manufacturing plant, part of its plans to expand production in the world's fastest-growing major mobile phone market.

The factory in Noida, on the outskirts of New Delhi, will allow Samsung to make phones at a lower cost due to its scale at a time when other phone making hubs such as China are getting more expensive, analysts tracking the sector said.

"This 50 billion-rupee investment will not only strengthen Samsung's business ties in India, it will also play a key role in India-Korea relations," Modi said in a speech in Hindi at the inauguration of the plant.

Samsung said last year it would spend 49.2 billion rupees (US$716.57 million) over three years to expand capacity at its Noida plant.

The new factory will help Samsung to double its current capacity for mobile phones in Noida to an annual 120 million units after the phased expansion plan is complete, the company said in a statement.

India, the world's second-biggest smartphone market and home to more than a billion wireless subscribers, is a big opportunity for Samsung where sluggish smartphone earnings growth has fuelled concerns that its mobile business is running out of ideas to underpin sales of its premium Galaxy devices.

Samsung, which has been assembling phones in India since 2007, also plans to export India-made handsets.

"We 'Make in India', 'Make for India' and now, we will 'Make for the World'," H C Hong, chief executive officer at Samsung India said in the statement.

Prime Minister Narendra Modi's government has imposed taxes on imports of key smartphone components as part of a plan to encourage electronics manufacturing in India which would boost growth and create millions of new jobs.

While Modi's flagship 'Make in India' campaign is still a long way from delivering on ambitious job promises, the programme has had some success with the phased manufacturing of mobile devices and components. More than 120 local factories currently assemble mobile phones and accessories like chargers, batteries, powerbanks and earphones in India, according to tech research firm Counterpoint.

"It's a move that'll obviously play well for Samsung but it also gives a much-needed shot in the arm to India's mobile manufacturing ecosystem as it will push rivals to consider expanding local production," said Navkendar Singh, an associate research director at International Data Corporation.

Cloud application revenue made easy
By Sankalp Phartiyal
Jul 10 2018
11:10AM