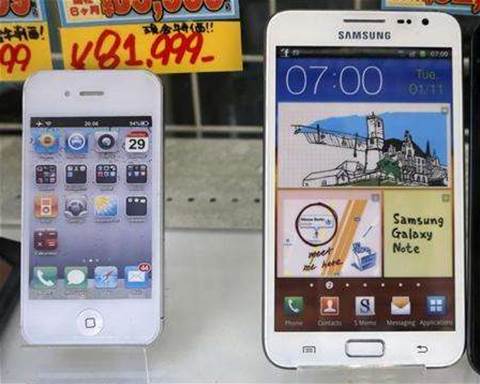 A US appeals court has rejected Apple's request to fast track its bid for a sales ban on several Samsung Electronics phones, ruling the iPhone maker could not argue its case to the full appeals court right away.

In its ruling on Monday, the Federal US Circuit Court of Appeals in Washington, DC, said a three-judge panel will first consider Apple's appeal, and the full appeals court would not decide whether to hear the case until after that.

Representatives for both Apple and Samsung could not immediately be reached for comment.

The fight in the appeals court comes after Apple won a $US1.05 billion verdict last year against Samsung in a California trial court.

Apple followed up its win by seeking a permanent ban on several older Samsung phones, but analysts expected Apple to try to extend such a ruling to Samsung's hotter selling models like the Galaxy S III.

The Federal Circuit ruling allows Samsung to keep its products on store shelves while Apple's appeal proceeds on a slower pace.

The same appeals court had rejected a separate Apple bid for a pretrial sales ban against Samsung's Galaxy Nexus phone, and last week refused to rehear that appeal before the full court.

Grabbing the hybrid cloud opportunity with Lenovo and Azure Services
By Dan Levine
Feb 5 2013
8:02AM