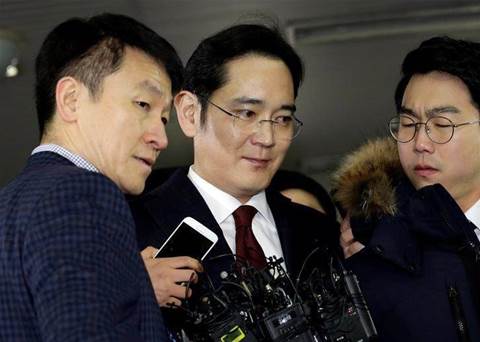 Samsung chief Jay Y. Lee was arrested on Friday, a South Korean court said, over his alleged role in a corruption scandal that led parliament to impeach president Park Geun-hye.

The 48-year-old Lee, Samsung's vice chairman, was taken into custody at the Seoul Detention Center, where he had awaited the court's decision following a day-long closed-door hearing that ended on Thursday evening.

The same court rejected a request from prosecutors last month to arrest Lee. On Tuesday, the special prosecutor's office had again requested a warrant to arrest Lee on bribery and other charges again.

The prosecution said it had secured additional evidence and brought more charges against Lee, the group's third-generation leader, in the latest warrant request. Lee's father, Samsung group patriarch Lee Kun-hee, was incapacitated by a 2014 heart attack.

"We acknowledge the cause and necessity of the arrest," a judge said in his ruling, citing additional allegations and evidence.

A spokeswoman for Samsung - the world's biggest maker of smartphones - did not have immediate comment on the arrest. The group and Lee have denied wrongdoing in the case.

The office has focussed its investigations on Samsung's relationship with Park, who was impeached in December and has been stripped of her powers while the Constitutional Court decides whether to uphold her impeachment.

That funding includes Samsung's sponsorship of the equestrian career of Choi's daughter, who is in detention in Denmark, having been on a South Korean wanted list.