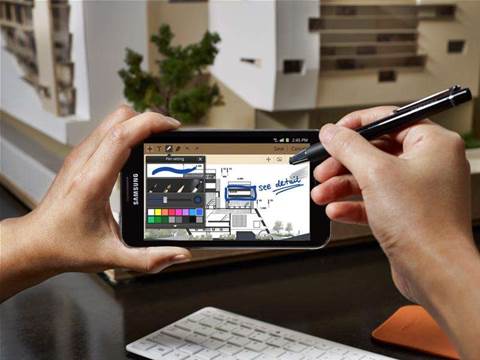 Samsung has finally made its smartphone-tablet hybrid Galaxy Note available to Australian customers, months after the device went on sale in the US and Europe.

The phone was officially unveiled by Samsung last night. It will be available for purchase this week from Optus and Vodafone for $899 outright, $0 on Optus’ 24 month $79 cap plan, and $5 on Vodafone’s 24 month $59 cap plan.

Telstra will retail the device from April but is yet to confirm pricing.

Samsung is touting the phone as a first in a newly-created category, sitting in between a smartphone and a tablet with a large 5.3in HD screen. The phone also includes a stylus ‘S Pen’ which allows users to sketch, take notes and annotate images and files on screen.

“The product combines the freedom of a paper notebook with the connectivity of Samsung’s smartphone technology and services,” Samsung’s vice president of telecommunications, Tyler McGee, said in a statement.

Samsung has confirmed the Galaxy Note will be updated from Android 2.3 Gingerbread to 4.0 Ice Cream Sandwich in several months. The phone holds 1GB of RAM and 16GB internal memory, and is powered by a 1.4GHz ARM Cortex A9 processor. It is 9.6mm thick and carries a 2MP front-facing camera and 8MP camera on the back.

Samsung’s only competitor in the smartphone-tablet hybrid category as yet is LG, which last month unveiled its 5in Optimus Vu.