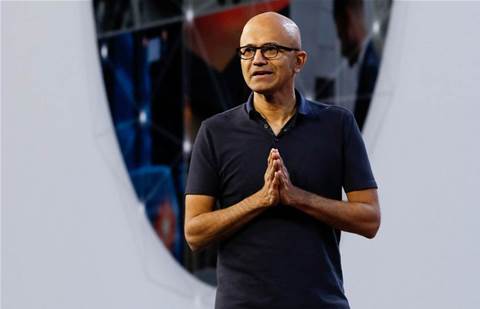 In kicking off the Microsoft Ignite 2018 conference on Monday, chief executive Satya Nadella used his keynote to pinpoint areas where Microsoft technologies are having the biggest impact in digital transformation.

Ignite, Microsoft's conference for IT professionals and developers, is being held this week in Orlando. "We are well and truly into this era of the intelligent cloud and intelligent edge," Nadella said during his keynote. "What's really happening out there is that computing is getting embedded in the real world."

What follows are Nadella's five boldest statements during his Microsoft Ignite 2018 keynote.

Nadella's underlying theme for the keynote was a concept he called "tech intensity." In a time when all industries are being transformed by digital technologies, there are huge opportunities, but they can be hamstrung by making the wrong bets, Nadella said.

"To capitalize on this paradigm shift, we need tech intensity," he said, which includes choosing the right areas to focus in building your own digital capabilities. "Make sure you focus on the things that truly make you unique," Nadella said.

Additionally, it's crucial to not depend on partners who are providing a commodity to you on one end but then competing with you on another end, he said. "Picking your partners well is where the strategic definition of being smart will really come through," Nadella said.

To tackle the persistent issue of business data existing in numerous silos, Nadella announced that Microsoft was forming a new partnership to tackle the issue—the Open Data Initiative—with two other leading software companies, SAP and Adobe.

The commitment from the three companies is that "we are going to unlock the data across all of these suites," Nadella said. Ultimately, the goal is "truly putting customers in control of their own customer data," he said. The Open Data Initiative will be open to other tech companies to join as well, Nadella added.

During Ignite 2018, Microsoft announced an array of updates to its cybersecurity product capabilities, including a single integrated offering for threat protection in Office, Azure and Windows (known as Microsoft Threat Protection). During his Ignite keynote, Nadella pointed to the way in which Microsoft was using its own cybersecurity operations to uncover and halt hacker activities. He offered the example of the company's Account Guard product, used by political candidates and organizations to ensure that their email accounts are secure.

The technology was used to uncover attacks against senators and political organizations by the hacker group Strontium, and Microsoft then worked with the legal system to thwart future attacks of this kind, Nadella said.

As for highly vulnerable small businesses, Nadella said Microsoft's cybersecurity technology detected a targeted malware attack against 58 small businesses in Johnson City, Tennessee. Microsoft was able to rapidly uncover the attack thanks to its security, machine learning and cloud technologies, he said.

"The models have to run with real speed," Nadella said. "You need a response from the cloud which is fast—sub-millisecond—[in order to] detect something like this."

Nadella also singled out Microsoft's security platform for edge and IoT, Azure Sphere, as a particular area of accelerated innovation.

At Ignite 2018, Microsoft is making Azure Sphere—which protects the billions of connected devices that depend on microcontroller unit devices—available in public preview.

"The next attack vector is not going to be in what you consider to be your classic computer—it's going to be in one of these IoT devices," Nadella said during his keynote.

"We came up with Azure Sphere to ensure that there is end-to-end security, starting with in fact the silicon architecture that has the hardware root of trust, a security operating system that runs on the MCU, with a cloud service that ensures end-to-end security. And now Azure Sphere is ready for adoption by anyone building devices, anyone embedding microcontrollers in their devices."

During his Ignite 2018 keynote, Nadella also announced Microsoft's latest expansion of its "AI for Good" initiative.

The new AI for Humanitarian Action initiative will focus on using artificial intelligence technologies to assist in four areas—disaster recovery; the needs of children; protecting refugees and displaced people; and human rights.

For instance, AI can assist with getting information gathered and transmitted more quickly to enable a humanitarian response, according to Microsoft. The company has committed to investing US$40 million in the initiative over the next five years.

"Whether it is disaster response, the needs for children, refugees and displace people, or human rights, we can't wait to see what tech intensity you can bring to solve these challenges," Nadella said.

Eliminating departmental friction within MSPs
By Kyle Alspach
Sep 25 2018
6:57AM