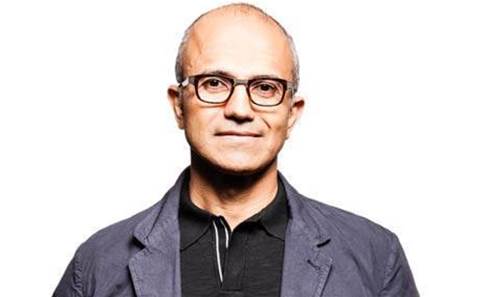 Speaking at the Inspire 2019 partner conference, Nadella highlighted some of the biggest wins and partner opportunities in the Azure cloud platform and "intelligent edge"—as well as in Dynamics 365, PowerApps, mixed reality and Microsoft 365.

Among other things, Nadella used his keynote at Inspire--which is being held this week in Las Vegas—to point out what he considers the "best opportunity for every one in this room to become a strategic partner for our customers."

What follows are the six biggest statements from Nadella's keynote at Microsoft Inspire 2019.

"Ninety percent of the data that we have today was created today was created in the last two years. That's the explosion of compute and data. We have 1 billion users of Windows, a couple billion smartphones. But 50 billion [endpoints are] all connected to the cloud. That's what's leading to us building out Azure as the world's computer. We now have 54 data centre regions. We're very, very thrilled to have the latest regions in the Middle East and in Africa. It's so exciting.

This doesn't mean we don't have a very opinionated view on what a modern application that is event-driven, serverless, could look like. We have a fantastic app model, with all the tool chains around it. But the thing that we've ensured is that this new-generation app model composes with everything that you've done in the past. That, to me, is the key of how we're going to move tech intensity in every corporation, every company, every institution."

We're not stopping at the cloud. We're taking the cloud to the edge, with consistency. Consistency in operating models, that means management security. Consistency in the development environment and the tech stacks. And when we talked about the edge over the last couple of years, the last year, it's become real. Airbus has Azure Stack powering many of their critical operations. And Azure Stack is the only consistent stack at the edge, of any public cloud, with full operational sovereignty. And as we meet the real-world needs of the world today, this is going to be so critical ...

Starbucks has an Azure Sphere — a microcontroller that's connected to Azure, think of it as the smallest compute node of Azure — in every espresso machine. The 9 billion microcontrollers that are shipped each year, just imagine all of those getting connected, becoming first-class compute nodes in an Azure fabric."

It builds on Azure services, it has this common data model, it has connectivity back to Dynamics 365 and Microsoft 365. So you can think of all of the applications inside of Microsoft 365 and Dynamics 365 as microservices and data that are available for any PowerApp developer. You have connectors to all the popular apps—SAP, Adobe, Workday, Salesforce.

Any application you want, you again can consume data and launch it from there. And you of course can do the same with your own applications. This is, perhaps, the best composition from Azure all the way to citizen developers. In fact, there can be workflow between professional developers working on Azure who can then create a microservice and expose it to a PowerApp developer. That's the type of developer activity that we see. And, we have a new addition to the PowerApps family—it's the AI Builder. It takes all those magical AI cognitive services capabilities, and brings it to any application that you may want to build."

"With Dynamics 365, you now have these modular, modern modules for all of the functions--whether it's sales, finance, operations, support. And it's great to see these getting deployed at scale. And one of the other things that's happened in the last year is AI across all of these functions. In fact, there's a complete new set of modules that are these insight modules. You can predict your sales pipeline and drive sales efficiency.

You can improve your customer service because of insights. You can improve your customer 360 view. These are all new insight modules that are part of Dynamics. You can deploy them with any customer who may have a different business system. Because there's no one who's deploying these AI-first modules. This is the best opportunity for every one in this room to become a strategic partner for our customers--to be able to infuse into every customer these AI-first modules. I think in the next year, hopefully all of you will discover this opportunity. It would be a great way for you to grow your own strategic business."

"There is a new commercial opportunity that's getting unlocked. It's the mixed reality cloud. It's [the] bridging of business process and any application across the boundaries of what's virtual and what's physical. HoloLens 2 is an absolute breakthrough. It's got twice the field-of-view, twice the comfort. We've also now built applications right into Dynamics 365—layout, guides, remote assistance, product visualizer. These are all out-of-the-box applications that take advantage of this new medium of mixed reality. And we have many, many third-party applications, from industrial automation to architecture.

We've also built out a new service in Azure, Azure Spatial Anchors. The combination of Azure Spatial Anchors, applications in Dynamics 365, a device like HoloLens 2, and any phone with an AR framework, can all come together to power this next generation of mixed-reality apps, and unlock an amazing opportunity for all of you."

In the last year we've had tremendous momentum. Ninety-five percent of the Fortune 500 are using Microsoft 365. And all of that is fueling more and more rapid innovation. Windows 10 — and its adoption in the enterprise — it's the fastest growth we've seen, in the last year. Innovation in devices—small devices like Surface Go, or Surface Hub, and our OEM partners who are continuing to innovation around devices. The AI that's getting infused into all of the Office applications. Video has become first class with Stream. Security and compliance are huge value propositions of Microsoft 365. That's what's fueling all of this growth and adoption.

The one product that has had an absolute breakout year is Teams. Teams is the hub for teamwork. It's really four things in one. It has chat. It has meetings. It brings together collaboration, using all the richness of Office tools, within that same scaffolding. It's the business process workflow. That's what Teams is about. It defies even the category definitions that are there out in the marketplace. And that's what's driving this tremendous momentum."