Scientists develop holograms you can touch 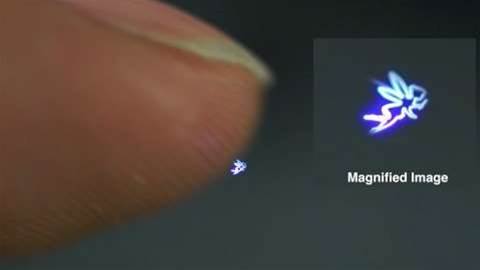 team of researchers from universities across Japan have developed a safe-to-touch form of hologram technology using femtosecond lasers. Dubbed “Fairy Lights” by its inventors, the technology fires lasers into the air, pulsing at one millionth of one billionth of a second to turn a specific point into plasma.

The research team managed to turn these holograms into interactive displays after seeing that touching them emitted a bright light. “It was found that the contact between plasma and a finger causes a brighter light,” the team's research paper states. “This effect can be used as a cue of the contact. One possible control is touch interaction in which floating images change when touched by a user.”

What's more, this touch interaction is actually tangible, with feedback to your finger when you touch the suspended plasma particles. “Shock waves are generated by plasma when a user touches the plasma voxels. The user feels an impulse on the finger as if the light has physical substance.” Sadly, the reason for why this happens is “beyond the scope” of the team's research and their paper.

This isn't the first hologram technology to be developed. Previous hologram technologies work on the same principle of creating voxels (three-dimensional pixels) at the focal point of an ionising laser. The difference here is that old hologram technology just wasn't safe. A laser pulsing at a nanosecond meant its images contained a significant amount of energy; touch it or walk through it, and you're going to end up burnt.

The advantage of femtosecond lasers is clear, less energy is produced when creating each voxel, and the technology is capable of rendering 200,000 voxels per second. However, despite this technological breakthrough, images are tiny, taking up no more space than eight cubic millimeters.

If the technology could scale up, which Spectrum IEEE claims it's capable of doing, then we could see hologram technology stuffed into the tech of the future.