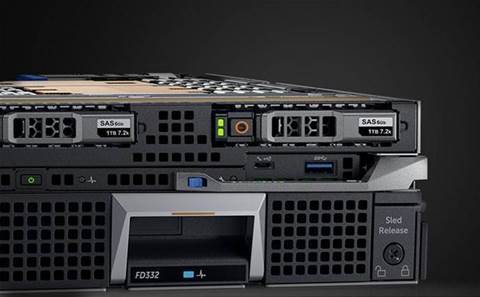 The latest generation of the PowerEdge server portfolio that Dell EMC unveiled at the Dell EMC World conference in May have finally hit the market worldwide.

Most of it, at least. Five of the seven models in the new line become available last week while customers will have to wait until later in the year for two.

Dubbed 14G, the fourteenth generation of the venerable PowerEdge line launches in lockstep with the release of Intel's new Xeon scalable processors.

Of course, that means PowerEdge 14G has plenty of competition, including Lenovo's rebranded ThinkSystem server line, which was introduced last month and also relies on Intel's latest processors

Dell EMC intends 14G to be "the bedrock of the modern data centre", and the portfolio will underpin a wide variety of Dell EMC systems, including the popular VxRail hyper-converged infrastructure offering.

Clearly, Dell EMC is intent on pushing growth in the server market as it consolidates. Dell EMC was the only major server vendor to show server revenue growth in the first quarter as the worldwide market declined nearly 5 percent, according to research firm IDC.

Chris Kelly, vice president and general manager, infrastructure solutions group at Dell EMC Australian & New Zealand, said: "While the consumer side of the computing space has seen gains in efficiency and performance with each generation leading to thinner and lighter laptops and tablets, 14G means something quite different for the data centre.

"This new generation of servers will very likely be the workhorse that powers the fourth industrial revolution, enabling businesses of all sizes to tackle the persistent technical and budget challenges that often impede progress when it comes to big data, cloud enablement, advanced analytics and automation."

1. Making it the foundation

Dell EMC shipped more than 465,000 servers in the first quarter, and part of its strategy for growing that number is making PowerEdge the basis for a broad selection of Dell EMC solutions.

The new PowerEdge is part of what Dell EMC calls scalable business architecture, a system that allows customers to move from traditional to virtualised to cloud-native workloads in software-defined data centres more easily.

The 14G portfolio is optimised for NVMe to help speed the deployment of software-defined data centre and hyper-converged infrastructure with faster database and storage performance and faster migration of VMs.

The company also says life-cycle management is easier and problems will be resolved nearly twice as fast as in the past through Dell EMC's ProSupport and Support Assist programs.

Dell EMC counts security as one of the major selling points of its servers, and 14G continues that with cryptographically trusted booting, which includes Intel Boot Guard protection, signed firmware and automatic BIOS recovery, among other features.

The PowerEdge portfolio also includes System Lockdown, which helps secure any system configuration from malicious or unintended changes and alerts users to any attempt to make system changes.

The PowerEdge R640 is billed as striking a balance between dense, scale-out data centre computing and storage in a 1U, two-socket platform.

The R740 is the line's workhorse server for demanding environments that depend on storage, I/O and application performance.

The R740XD is a 2U, two-socket server designed for optimum storage performance and density for software-defined storage, cloud service providers, big data and co-location hosting. The R740XD is available now.

The R940 is a 3U, four-socket platform designed for demanding, mission-critical workloads like ERP systems, e-commerce and large databases.

The M640 and FC640 are modular servers designed for high-performance computing in dense, scalable environments.

The C6420 is aimed at high-performance computing and maximises density, scalability and energy efficiency.

The M640 and FC640 will be available later this year, and will come in blade and modular platforms. The C6420 comes in a 2U, eight-socket form factor and is available now.