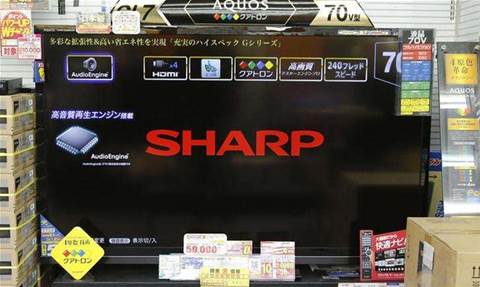 Sharp rebounded to a third-quarter operating profit, improving the bailed-out consumer electroncs maker's chances of convincing lenders and shareholders that it is a viable company.

In the three months to December 31, Sharp posted an operating profit of 2.6 billion yen ($A2 million), compared with a loss of 24.4 billion yen a year ago. The result was ahead of an average 230 million yen loss estimated by seven analysts surveyed by Thomson Reuters I/B/E/S.

The maker of Aquos TVs stuck with its forecast for a full-year operating loss of 155 billion yen compared with an average 152 billion yen loss expected by 19 analysts.

Sharp in October secured a $US4.4 billion ($A4.2 billion) bailout from banks but had to mortgage its offices and factories in Japan to secure the loans. It also pledged to trim its workforce by 10,000 people and sell off assets.

Grow your software revenue by selling these 5 affordable, essential tools for the modern workplace
By a Staff Writer
Feb 4 2013
7:03AM