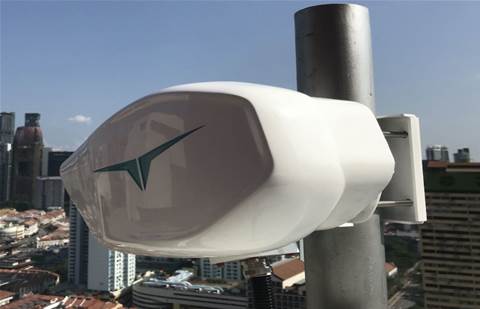 Singapore-headquartered laser communications vendor Transcelestial is stepping up its Australian go-to-market efforts through the channel, getting a boost from a regional distribution deal with Exclusive Networks.

Transcelestial is aiming to position itself as an alternative to the NBN and microwave-powered 5G networks in Australia, using its point-to-point wireless communication network to deliver up to 10 gigabits per second to telcos and enterprises.

The company has two distinct plans to deliver internet connectivity, a terrestrial product connecting between buildings and towers through lasers for data transfer, and a more ambitious plan to beam lasers into space through nano-satellites redirecting them to a specific target destination.

The terrestrial network works through Transcelestial's mass-produced network device Centauri (pictured), which uses the laser technology to create a point-to-point distribution network between buildings and towers.

The network acts as wireless backhaul for telcos and enterprises and won’t require a spectrum pre-allocation to operate. Transcelestial also claims its tech is more cost-effective and quicker to deploy compared to undersea cables and physical fibre cable networks.

Speaking to CRN, Transcelestial ANZ sales lead Chantra Hang said the company is aiming for a mass rollout of its network either through single carriers or multiple carrier rollouts, with a target of 100 devices out in the field.

“We see that there’s two major problems that we can solve at the moment on the ground here - there’s only really two mediums that the internet is distributed here in Australia, namely fibre optic cables like NBN or microwave radio to send it from tower to tower,” Hang said.

“What we see that we’re doing is reinventing something that’s already been made.”

Hang added that Transcelestial has chosen to go through the channel route in Australia to prove its maturity and that the technology is ready for mass deployment, as well as getting the ability to scale and touch as many places as possible.

He said Transcelestial has been engaging with all the major Australian telcos and internet providers right now in various stages, and is also expecting some deployments to go live later this month or early 2022.

“We’re approaching it a little bit by a little bit at a time because we want people to be comfortable with the technology because it’s still perceived as new,” Hang said.

“What I really want is for people to not even think about the technology’s efficacy and not worry about taking a risk on something. That’s where we are at the moment, to just build an education, make people understand and know what [Transcelestial] does and make it become more commonplace.”

In terms of customers, the 10 gigabit offering would suit a variety of use cases, including a 3000-person apartment block, a small community or an entire office block for the consumer end, while the upper end would be ISPs and telcos.

Hang added the push into Australia was partly driven by the presence of some Transcelestial investors locally, as well as geography.

“Australia is seen as a more mature market than Asia is in some respects, where it aligns a lot better with the likes of Europe or North America, so if we can prove it here, we could make a push into those markets in the future,” he said.