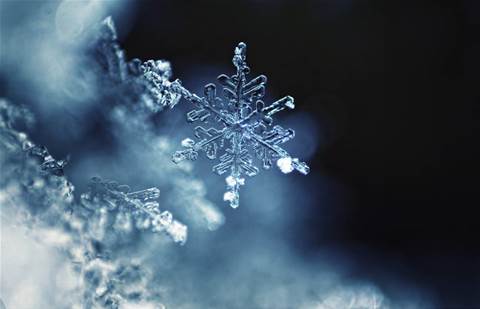 Shares in cloud data management company Snowflake began trading on the New York Stock Exchange Wednesday in what financial analysts said was the biggest software company IPO ever and the largest IPO so far of 2020.

Snowflake shares began trading under the ticker symbol “SNOW” at 12:38 p.m. USET, opening at $US245 a share and quickly surging to briefly more than $US300 before settling back. A few minutes in, trading of Snowflake shares was briefly halted at $US276.22 because of volatility before resuming a few minutes later.

As of 2 p.m. USET, Snowflake’s shares had settled around $US260 to $US265 per share, putting the company’s market cap around $US73 billion, larger than many IT industry stalwarts including VMware and Dell Technologies with market caps around $US62 billion and $US51 billion, respectively.

Snowflake initially priced its stock at $US120 per share. The IPO raised $US3.4 billion.

“We are primarily focused on growth, but we are not focused on what some people refer to as ‘growth at all costs,’” said Snowflake CEO Frank Slootman in a televised interview on CNBC just after the company’s shares began trading.

Slootman, who took over the CEO duties in April 2019, was responding to a question about the company’s growth versus profitability goals, especially given its high spending for sales and marketing activities.

Snowflake was founded in 2012 with an initial focus on providing cloud data warehouse services. More recently the company has broadened its potential market by defining itself as a cloud data platform company.

Anticipation for Snowflake’s first stock trades were heightened last week when Snowflake, in a filing with the U.S. Securities and Exchange Commission, disclosed that it had secured commitments from Berkshire Hathaway and Salesforce to each buy $US250 million worth of Snowflake stock in a private placement immediately after its public market debut.

Snowflake and Salesforce have an extensive alliance that includes data integration tools and capabilities for moving Salesforce application data into the Snowflake platform for analysis and collaboration tasks.

Snowflake’s services run on Amazon Web Services, Microsoft Azure and Google Cloud Platform – an interesting dynamic given that those cloud giants, along with having Snowflake as a client, also offer cloud data warehouse, data management and business analytics services that compete with Snowflake.

“I think the public cloud companies are also sort of finding their footing and their bearing – certainly at lower levels of the organization sometimes the hostilities break out,” Slootman said during the CNBC interview when asked about potential competition from the cloud platform vendors and whether relying on them to provide Snowflake’s services was dangerous.

“But when you sort of go up the ladder and you talk to the people who are sitting on top of those organizations, they understand that their platforms need to have innovation, they need best of breed, they need choice. Because if they don’t have that they become less competitive against their competitors,” Slootman said.

“So, it’s sometimes a bit of an ambivalent situation. But as we learned collectively as an industry, sometimes we partner, sometimes we compete,” the CEO said. “Competition is not bad. It makes all of us better and the customer benefits.”

Slootman was also asked whether he had been hired primarily to manage Snowflake through the company’s IPO or if he would remain CEO for the long term. (He previously managed IPOs for Data Domain and ServiceNow.)

“I literally have an indefinite horizon,” Slootman said of his plans.

In June Snowflake launched its first channel partner program for MSP, reseller, ISV and technology partners. Colleen Kapase, Snowflake vice president of worldwide partner and alliances, was hired away from VMware in mid-2019 to oversee the company’s channel initiatives.

Eliminating departmental friction within MSPs
By Rick Whiting
Sep 17 2020
11:25AM