Socks walk all over t-shirts as giveaways, say marketers 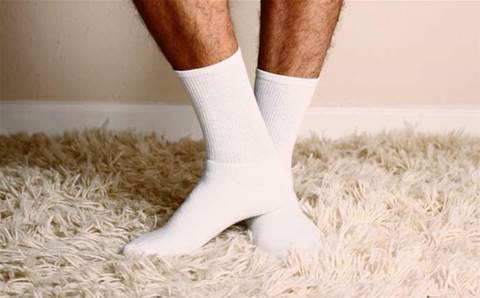 I go to over 30 industry events a year and while the food, the venues and the keynote speech* are nearly always the same, one thing is new: branded socks are becoming a more common giveaway than branded t-shirts.

So I decided to find out why.

Nutanix’s head of marketing for ANZ Jade Meara summed up the reasons why socks have stepped up.

“From a vendor perspective, they are inexpensive to produce...  and easy to ship,” she said.

“Also socks can be more bold or unconventional in their design than a t-shirt, and people will still wear them! Finally, from a punter’s perspective, socks are a grudge purchase, so any chance to circumnavigate the annual sock purchase pilgrimage is usually welcomed.”

Socks are also easy because one size fits most.

“T-shirts are hard to organize,” lamented Peter Dodds, Avocado Consulting’s cloud migration manager. “You have to predict your audience in advance, i.e. ratio of male to female, will there be rotund, bearded engineer types or coiffed and preened salesy types.”

Branded socks can also work for different types of prospects. “Socks can be worn by those who have to wear suits,” pointed out security consultant Phil Clemo. “T-shirts, not so much.”

T-shirts are also just old-hat. Everyone in the industry has at least one. And almost everyone has decided they're too ugly to wear other than as pajamas or for doing nasty jobs around the house. That means the logos they carry aren't going to be seen very widely

Heading to #NetAppInsight? make sure with all the walking, you pack plenty of socks! sometimes you can picks up some extras! #NetAppATeam  @NetAppInsight #socks @NetApp #NetAppHCI @FlexPod @SolidFire #NetApp @NetAppANZ pic.twitter.com/qgykz8Xcko

But whoever scores  free socks and whatever they wear them with, they’re going to see them a lot.

“You wear a pair of socks once a fortnight and you see the brand on them four times during that period,” said Tom Lawrence, the managing director of Swanky Socks. With the average pair of socks lasting two years that means over 200 brand impressions.

Brisbane-based workforce SaaS provider Tanda gives away about 20,000 pairs of socks a year, mostly at trade shows. Senior Workforce success executive Phil Johnson said the company's sales team also uses them to get a foot in the door.

"Because we are a SaaS company, we want customers to have something tangible from us," he said. Posting customers some socks adds a physical aspect to a relationship that is otherwise virtual.

The company also sends socks to prospects that trial its services but don't take up a paid subscription. "We'll slip in a note that says 'don't get cold feet on us'," Johnson said.

Socks lend themselves to other puns and jokes. Megaport founder Bevan Slattery sent us a photo of the company’s custom socks labeled as having been made with “elastic fabric”, a pun on the company’s elastic networking services. 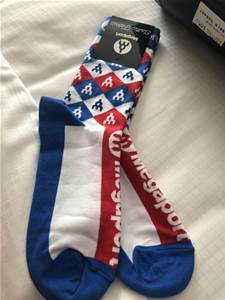 Vanessa Curtis, founder of Radial Consulting and previously senior marketing manager at storage startup Tintri once ran a campaign “that focused on delivering socks to prospects packaged with the title ‘Try Us On For Size’.”

The campaign went so well in Australia it was taken up globally.

While socks are currently a comfortable choice for marketers, they may be beginning to unravel as a marketing tactic. Eric Pinkerton of security vendor Hivint told us that “We started giving away Hivint socks a few years ago, mainly because people really like them.”

But he added that “Recently they have become much more common, so perhaps it's time for some innovation ...   socks that have been augmented by machine learning, or socks woven out of the blockchain.”

Satire aside, socks aren't particularly useful for many women's work wardrobes, which limits their appeal.

But those objections aren't putting holes in the sock business: Lawrence said branded socks will soon account for more than half of his company’s sales, with the tough climate for fashion retail making corporate sales a priority for his business.

He also advised keeping it simple if you decide to try on some socks as a marketing tactic. The most durable and desirable socks are made of merino wool, he said, but cotton socks are also durable. Cheaper materials won’t wear as well and therefore may not be the way to put your brand's best foot forward or dip your toes in the hosiery marketing waters. He also recommended against complex logos, as they require blending nylon and cotton, which again isn’t good for sock longevity. Complex logos also create snags inside a sock, making them likely to annoy customers.

Lawrence wouldn't say what he charges for socks, but said he marks up his costs by an industry-standard 35 percent and promotional companies he sells to add a similar markup. Tanba's Phil Johnson did share prices: he pays about $1.30 a pair, landed, and orders direct from a Chinese supplier.

You can find plenty more sock-related wisdom in this LinkedIn thread that we used to get in on the ground floor of the sock situation.

* The keynote is always a variation on “Do a digital transformation to avoid being whacked by the Uber/AirBnB of your industry, and while you’re at it make security a board-level issue and accelerate to the future of work with cloud services that millennials will consume as opex.”