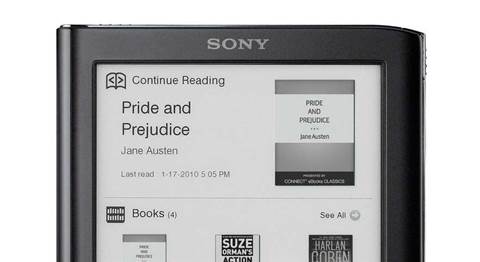 Today at the IFA trade show in Germany Sony announced new models of ebook reader. This is a market that the company has been in overseas for some years, but for the first time it will be releasing ebook readers in Australia, with two of the new models due to hit shelves later this month.

Australians will be getting the Reader Touch Edition and Reader Pocket Edition. Despite the naming scheme both of these readers used E-Ink based touchscreens - they are differentiated by size and by small differences in featureset.

This touchscreen is perhaps the most noticeable difference between Sony's reader and the incredibly popular Kindle from Amazon. The Kindle has no touch functions; instead it relies on buttons on the side of the device for page turning. To turn the page on the Sony readers one simply flicks the screen. Beyond page turning the touchscreen enables highlighting of text and double clicking on a word will bring up one of 12 inbuilt dictionaries with the definition (these dictionaries include American and British English as well as 10 translation dictionaries).

Unlike the Kindle, the Sony Readers lack any kind of wireless connectivity. Instead content is downloaded onto a PC and transferred via USB. Sony did launch a Reader with WiFi and 3G for overseas markets, but it won't be releasing that version in Australia.

The readers work with a wide variety of online ebook stores (as long as they support ePub), but Sony has also announced that it is working with REDgroup Retail, which owns both Borders and Angus and Robinson stores in Australia. This arrangement will mean that Readers are set up to quickly and easily access these familiar stores for those who aren't necessarily technologically savvy.