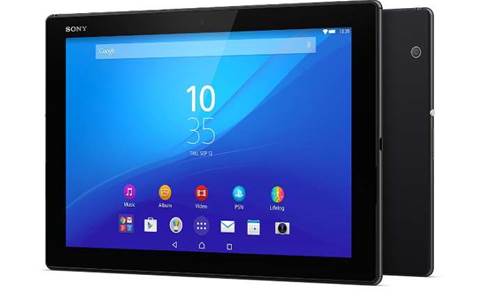 Sony has launched two new devices at Mobile World Congress, but neither is the much hyped follow up to the company's Z3 smartphones. Instead, the firm has launched the Xperia Z4 Tablet and the Xperia M4 Aqua - an update to Sony's mid-range smartphone.

As previously suggested, the 10in Z4 Tablet is slimmer and lighter than last year's model, measuring 6.1mm thick and 392g from the Wi-Fi version. It has an octa-core Qualcomm Snapdragon processor, a 2K, 2,560 x 1,600 IPS display, and will be water and dust resistant to IP68, just like many of Sony's other flagship products.

Unlike other Xperia products, however, the Z4 Tablet will feature a "capless" microUSB charging point, which means users won't have to flip open a flap to get at the internals. Having used many Xperia products over the past few years, we can vouch for the fact that this will be a huge improvement.

The tablet will run Android 5 Lollipop, and will also support Sony's new Hi-Res Audio system and LDAC wireless audio codec. Prices and exact release date for the new tablet have yet to be confirmed, but it'll be out in "[the northern] spring".

In slightly less exciting news, Sony also launched a new mid-range phone, the Xperia M4 Aqua. As the name suggests, the phone is waterproof (IP65/8 rated), and comes with two cameras - a 13-megapixel one on the rear and a 5-megapixel "selfie" camera on the front.

As with the Xperia Z4 Tablet, it runs on Android 5 Lollipop and features the same capless microUSB socket.

It packs some pretty impressive internals as well, for a mid-range phone, including and octa-core Qualcomm Snapdragon 615 processor, 4G connectivity and, Sony claims, up to two days battery life.

As with the Xperia Z4 Tablet, though, you'll have to wait until "[the northern] spring" to get it.