Startups tout their wares at Tech23 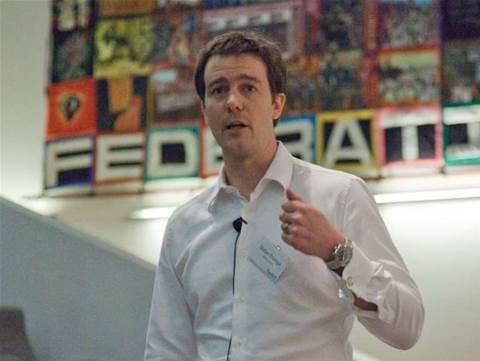 CEO of Culture Amp describes to attendees why HR software is 'useless'.

Sydney played host to Tech23 today, an event sponsored by the NSW Government to help 23 young companies explain their products to, and receive constructive criticism and advice from, a panel of industry experts.

In the morning session, one of the highlights was Culture Amp, a company run by ex-software developer Didier Elzinga, who until June this year was CEO of visual effects specialist Risingsun Pictures, where he had worked for 14 years.

Culture Amp is developing a software application called Resonance that is designed to help companies manage their culture but according to Elzinga, it is very different to standard HR software on the market.

"People problems are the hardest thing. I spent five years trying to buy HR tools but they are a waste of time - they are designed to make somebody's life easier instead of a tool to help people communicate," he said.

Elzinga said Resonance helps managers communicate with their employees on a daily basis and provide feedback on how they are performing, which he claims is far superior to the standard annual appraisal model, which most companies use.

"It is not just about negative feedback, it is also praise. If i see you do something and i think it is a good thing, i can use the system to give you some good feedback. Everyday when you log in and you see that affirmation, it builds up value in the culture and builds up value that you are worthwhile.

"It is the day-to day stuff that makes the culture work... if we have been working together for six months, I can pull up all the feedback we have given each other and we can look at it and talk about it.

"[It means] you are not going into the meeting to find out if you are performing, you already know that so now we can have a much more meaningful, high level discussion. That is the problem with performance appraisals, they are neither," Elzinga said.

Another firm that had attendees excited was Posse Holdings, a company set up by Rebekah Campbell who used to run a talent management company that represented the band Evermore.

She told attendees that after spending lots of money on advertising that didn't work, she started recruiting the band's fans and paying them a commission for tickets they sold using social networking sites like Facebook and MySpace.

Before long, Campbell said this practice accounted for about 20 percent of ticket sales and was far more effective than spending money on traditional advertising.

"The only people we are taking money from is traditional media," she told attendees.

Another highlight was Red Lizard Software, which started off as a NICTA project and makes tools that help software development companies scan their code to search for coding errors such as buffer overflows.

For a full list of companies that made up Tech23, visit www.tech23.com.au. You can also follow a very lively Twitter feed from the event using the hashtag #tech23.